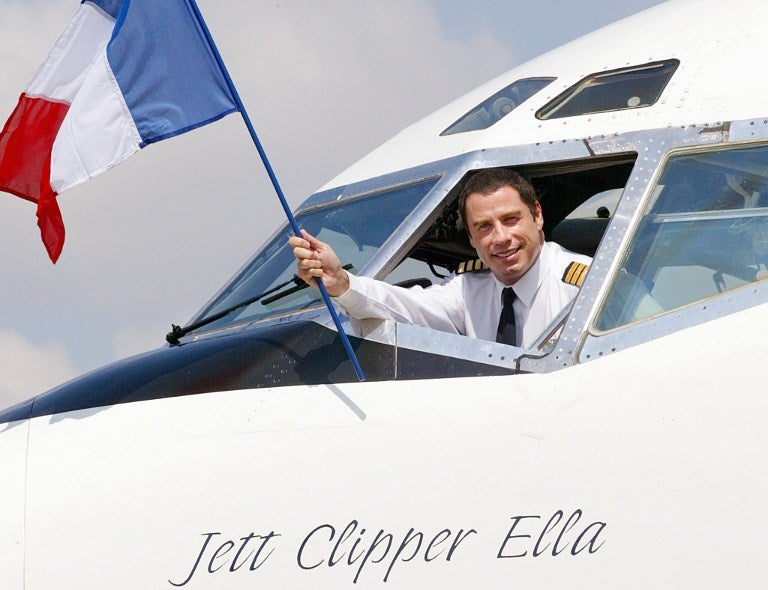 US film star John Travolta waves the French flag from the cockpit of his own Boeing 707 airliner named “Jett Clipper Ella” after his two children, as he arrives at Le Bourget airport near Paris, 13 August 2002. AFP FILE

SYDNEY, Australia — Hollywood star John Travolta has donated his “beloved” Boeing 707 plane to an Australian aviation museum and is aiming to be part of the crew to deliver the vintage aircraft.

Made for Qantas Airways in 1964, the “Saturday Night Fever” heartthrob and qualified pilot acquired the jet when Australia’s national carrier retired it more than 30 years later.

“It gives me great pleasure to make this exciting historical announcement that my beloved Boeing 707 aircraft has been donated to the Historical Aircraft Restoration society (HARS),” Travolta, a Qantas ambassador since 2002, said in a statement.

Australian aircraft preservation organization HARS will help restore the plane so it can make the journey from the United States to their base some 90 miles (145 kilometers) from Sydney.

A date for the flight is not yet fixed but the actor, a long-time aviation buff, said he plans to be on it.

“The aircraft currently requires a lot of work to be restored to a safe flying state and having seen firsthand the dedication and passion of people at HARS, I have no doubt this beautiful and historical aircraft will be flying again,” Travolta said.

“I am hoping to be part of the crew to fly the aircraft to Australia.”

HARS President Bob De La Hunty said the idea was first floated when he met Travolta in 2009 and the pair flew a Qantas 1955 Super Constellation aircraft along Australia’s east coast.

“We share a mutual respect for old airplanes and flying and at that stage we were keen to suggest to him that if he ever wanted to part with his Boeing 707 we would be very interested in it,” De La Hunty told broadcaster ABC.

“When we heard earlier this year that he was looking at possibly not continuing with his Boeing 707, we made contact. He jumped at the idea and so we’ve been in detailed discussions and negotiations since.”

Boeing 707s dominated passenger aircraft in the 1960s, helping usher in an era of long-range travel which had previously been dominated by rail and sea. CBB