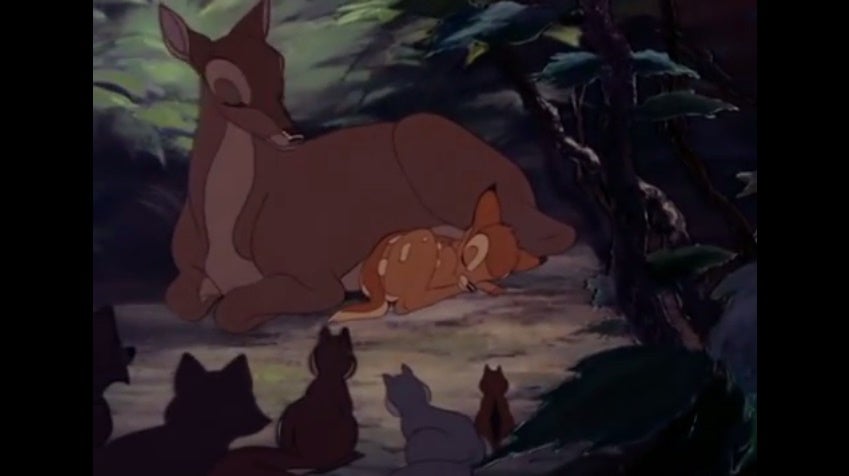 LOS ANGELES—A timeless tale of an adorable fawn and his forest pals, or the death of childhood innocence? Either way, and nearly 75 years on, Disney classic “Bambi” packs as powerful a punch as it ever has.

The Walt Disney Company bewitched generations of children and children-at-heart with its pioneering animated film, released in August 1942, about a wide-eyed young deer and his doting mom.

But the shocking image of young Bambi curled up next to the doe after she is slain by hunters has become as iconic as any scene in cinema history, credited with opening up taboo conversations about death and helping youngsters cope with bereavement.

It also kindled former Beatle Paul McCartney’s interest in animal rights and has served as the template for every harrowing Disney death since, from Mufasa in “The Lion King” to Hiro’s brother Tadashi in “Big Hero 6.”

“You’re creating a sense of what life was like for these animals in the forest and loss was part of it,” production designer Paul Felix told journalists at Walt Disney Animation Studios in Burbank, California.

“To be honest about the vision you had for the film, you couldn’t leave that out. It’s just a question of how it’s done, how you prepare an audience for something like that.”

Felix, who has been touching up the animation for a diamond anniversary Blu-ray and DVD version on sale in June, first saw Bambi as an adult and says the movie remains “deeply revered, a real touchstone” at Disney.

“It’s just a master class. It also had this most amazing use of color in it but I couldn’t even think about that for, like, 10 more years because there was so much to be learned,” he says.

Even at Disney, “Bambi” was hardly alone in exploring childhood trauma, following the dead parents, murderous stepmothers and children-donkey transformations of “Dumbo,” “Snow White and the Seven Dwarfs” and “Pinocchio.”

But “Bambi” often leads lists of the saddest moments in cinema, and even moved Time magazine to include the movie among its top 25 horror movies of all time, alongside “Frankenstein,” “The Exorcist” and “Night of the Living Dead.”

In a departure from form, Walt Disney used real children to voice the young characters in what became — and would remain — the impresario’s favorite of the company’s groundbreaking animated films.

Born in Depression-era Texas and raised in Memphis, Donnie Dunagan, now 82, was brought in to voice young Bambi after impressing with a role in “Son of Frankenstein” (1939) opposite Boris Karloff.

It proved to be his fifth and final credited role and, by the age of 13, he was earning a full time living as a lathe operator before enlisting as a Marine and becoming a war hero.

Dunagan remembers the company — and Walt Disney himself — as lacking in the pomposity the young star had seen at other studios during his short film career.

“I didn’t know he was the captain of the whole thing. He was a worker, he was all over the place, helping, pitching in, a very keen personality, good eye contact all the time,” Dunagan told Agence France-Presse.

Peter Behn, also 82, was four when he went for the part of Bambi. He didn’t get it due to what Disney describes as an “overly rambunctious” voice but was instead offered the role of the deer’s playful rabbit companion Thumper.

The son of a successful screenwriter, Behn had already appeared in three short films but, like Dunagan, went into the military and then worked as a real estate broker before retiring to the mountains of Utah with his second wife.

“If you go out in public, I guarantee you, you can ask 10 people if they have ever seen the movie and at least nine of them will say they have,” he said.

“It’s very hard to find anyone who hasn’t seen the movie and hasn’t been impacted by it one way or another.”