Amaya: An epic journey back in time 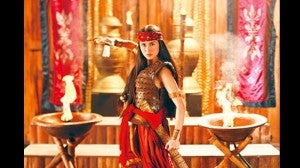 The story is set in the pre-colonial period of the 1500s. It is about a princess (portrayed by Marian Rivera), who is forced to into slavery. She later discovers her extraordinary powers, which she uses to lead her people at a time when males dominated society.

“We’ve shot scenes in Norzagaray and Marilao, Bulacan; Calatagan, Batangas; Morong, Bataan; Subic, Zambales; Bolinao, Pangasinan and a couple more,” Alejandre told Inquirer Entertainment during a recent media gathering. “Why are these sets far from each other? Because the story happens when there weren’t many structures yet. We had to look for places with very few establishments, which don’t disturb viewers visually.”

Alejandre said he accepted the project, which the network dubbed as an “epic-serye,” for several reasons: “I believe in the story of  ‘Amaya.’ I also think this genre is exciting and that it can be a format where dozens of stories can be told and retold. Lastly, I think the money that GMA 7 is putting into this is worth it.”

The series is created by the same team that worked on “Encantadia” in 2005. The story is written by Suzette Doctolero, with Rodell Cruz as production designer and Gino Gonzales as costume expert.

Inquirer Entertainment sat down with Alejandre, who only had good words for his lead actors Marian, Sid Lucero and Mikael Daez. He also talked about the pressure of directing a multimillion-peso project.

Will you be pushing Marian to her limits in this series?

She already does that on her own. She knows that, as an artist, she should try new things. This is physically challenging for her. She had to run in the forest topless and barefoot under the hot sun while holding a full-grown snake. She did this repeatedly, with no qualms. I made her walk on the sand from 9 a.m. to 6 p.m., but I never heard her complain. Unlike me, she has no fear of snakes. She has held three different snakes since we started taping. These snakes tend to go wild when the weather gets too hot for them.

Did it really take you more than a year in pre-production?

Yes. The idea for “Amaya” came from a crazy writer who dared to go wild. I have to hand it to Suzette, who wrote the story from a long-forgotten period. We’ve commissioned two experts from the University of the Philippines’ history department as consultants. When the script was given to me, I had a series of meetings with Suzette and the historians. This took two months. We had to validate a lot of processes and make sure that some events in the lives of our characters really happened in the 1500s.

Can you cite examples?

It took us three hours to set up a burial rite of a babaylan (priestess) because we first had to look for a centuries-old balete tree. When we were finally ready, we were told that burial rites were only done during mornings. We had to wait for the next day.

Buboy Villar also stars in the GMA 7 teleserye to be aired soon.

When you look closely at Amaya’s bed, you’ll see that it has engravings. The design team spent time and money to recreate a princess’ bed (in the 1500s).

We want to tell a good story. If it stirs interest in our history, that’s good. If it sparks discussion, that’s also good. We don’t want to be historians but we want to tell a love story that may have happened at a time and place referred to in “Amaya.”

Did GMA 7 set a budget limit?

I can say this project costs hundreds of millions of pesos, but the GMA 7 bosses and I never talked about money. Whenever they sat down with me, it was always to say that they wanted to see certain things in the show.

How do you describe Sid as an actor?

He’s very intense. He’s an acting genius. He’s the validation of all my assumptions. We’ve not shot major scenes yet, but I know that he’s a brilliant artist. I gave him a difficult piece during his audition. On the 10th second, I already knew that he’s Prince Bagani.

My only basis for describing him was what I saw during his screening and the workshop he attended. He’s very promising, he wouldn’t be on the show if I don’t believe in him.

Are you feeling the pressure of directing such a big project?

I feel extremely tired. This requires so much energy. When I’m tired, I’m vulnerable to a lot of emotions. Only now, in all my 20 years as a director, have I felt so tired. Whenever we pack up, tulog agad ako sa kotse.

I’m also doing “Ang Panday,” (starring Senator Bong Revilla). I feel overwhelmed with the trust. I’m so grateful. What do I give in return? I work hard.

How long do you expect this series to run? What should viewers expect from it?

This will run for about 22 weeks. Viewers will witness battle scenes with a cast of hundreds. They will see swords so beautifully crafted and ergonomic because they’re based on research. We constructed almost a dozen karakoa, or war ships, for the show. It was really difficult to shoot. We don’t cheat. We had to mount cranes in the water for these ships. Filipinos are very talented. Our architecture is very practical. We don’t owe this kind of civilization to the Spaniards. We were doing well long before they arrived.

Our writers’ imagination didn’t stop there. It was necessary for me and the people who will execute what’s on paper to further the script, then let it flourish. That’s my responsibility as a director.