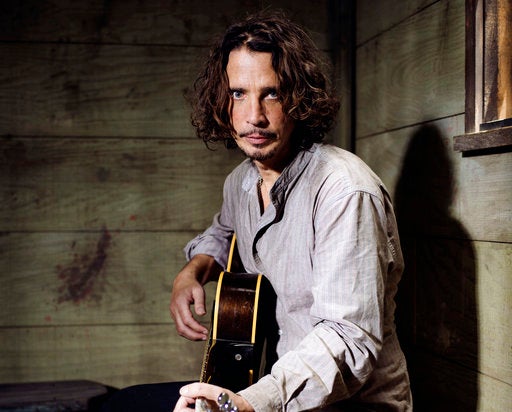 In this July 29, 2015 file photo, Chris Cornell plays guitar during a portrait session at The Paramount Ranch in Agoura Hills, Calif. Cornell, 52, who gained fame as the lead singer of the bands Soundgarden and Audioslave, died at a hotel in Detroit and police said Thursday, May 18, 2017, that his death is being investigated as a possible suicide. (Photo by Casey Curry/Invision/AP, File)

DETROIT— Chris Cornell, one of the most lauded and respected contemporary lead singers in rock music with his bands Soundgarden and Audioslave, hanged himself Wednesday in a Detroit hotel room, according to the city’s medical examiner. He was 52.

The Wayne County Medical Examiner’s Office said Thursday it completed the preliminary autopsy on Cornell, but that “a full autopsy report has not yet been completed.” A police spokesman told two Detroit newspapers that the singer was found with a band around his neck.

Cornell’s death stunned his family and his die-hard fans, who Cornell just performed for hours earlier at a show in Detroit. Soundgarden’s current tour kicked off in late April and was planned to run through May 27. He was found dead at the MGM Grand Detroit hotel by a family friend who went to his room after Cornell’s wife asked him to check on the singer, police said.

Cornell was a leader of the grunge movement with Seattle-based Soundgarden — with whom he gained critical and commercial acclaim — but also found success outside the band with other projects, including Audioslave, Temple of the Dog as well as solo albums. He was widely respected in the music industry: He reached success in every band lineup he was part of it, his voice was memorable and powerful, and he was a skilled songwriter, even collaborating on a number of film soundtracks, including the James Bond theme song for 2006’s “Casino Royale” and “The Keeper” from the film “Machine Gun Preacher,” which earned Cornell a Golden Globe nomination.

“To create the intimacy of an acoustic performance there needed to be real stories. They need to be kind of real and they need to have a beginning, middle and an end,” Cornell said of songwriting in a 2015 interview with The Associated Press. “That’s always a challenge in three in a half or four minutes — to be able to do that, to be able to do it directly.”

Cornell, who grew up in Seattle, said he started using drugs at age 13 and was kicked out of school at 15.

“I went from being a daily drug user at 13 to having bad drug experiences and quitting drugs by the time I was 14 and then not having any friends until the time I was 16,” he told Rolling Stone in 1994. “There was about two years where I was more or less agoraphobic and didn’t deal with anybody, didn’t talk to anybody, didn’t have any friends at all. All the friends that I had were still (messed) up with drugs and were people that I didn’t really have anything in common with.”

But at 16 he grew serious about music, learning to play the drums while also working as a busboy and dishwasher.

“That was the toughest time in my life,” he told Rolling Stone.

He eventually became a Grammy winner with Soundgarden, formed in 1984 and coming out of the rapidly growing Seattle music scene, which included Nirvana, Pearl Jam and Alice in Chains.

“There’s something about Seattle, it’s always been a hard rock town, too. I didn’t realize growing up as kid that Seattle had much more of a hard rock focus and a guitar rock focus than other cities did,” Cornell told the AP in 2011. “It was like a Detroit, only northwest kind of. There’s no reason that I would think I know how to define it, but it’s always been there.”

The band, which had released hit songs and found success, marked a mainstream breakthrough with “Superunknown,” its 1994 album that won them two Grammys, sold more than five million units in the U.S., and launched five hits, including “Black Hole Sun,” one of the most popular alternative rock songs from the 1990s.

The group, formed with guitarist Kim Thayil and bassist Hiro Yamamoto, broke up in 1997.

In 2001, Cornell joined Audioslave, a supergroup that included former Rage Against the Machine members Tom Morello, Brad Wilk and Tim Commerford. The band released three albums in six years and also performed at a concert billed as Cuba’s first outdoor rock concert by an American band, though some Cuban artists have disputed that claim.

Audioslave disbanded in 2007, but Cornell and Soundgarden reunited in 2010 and released the band’s sixth studio album, “King Animal” in 2012.

Cornell also collaborated with members of what would become Pearl Jam to form Temple of the Dog, which produced a self-titled album in 1991 in tribute to friend Andrew Wood, former frontman of Mother Love Bone. In 2011, Cornell was ranked ninth on Rolling Stone list of the best lead singers of all-time, selected by its readers.

He also released solo albums, and Nielsen Music said as a band member and solo act, the singer sold almost 15 million albums and 8.8 million digital songs in the U.S.

His first solo album, 1999’s “Euphoria Morning,” was a dark album that was initially supposed to be titled “Euphoria Mourning.”

“It was a pretty dark album lyrically and pretty depressing, and I was going through a really difficult time in my life — my band wasn’t together anymore, my marriage was falling apart and I was dealing with it by drinking way too much, and that has its own problems, particularly with depression,” he told Rolling Stone in 2015.

Cornell referenced death — and suicide — in 2007 interview with the AP when discussing his single, “No Such Thing.” It appeared on his second solo album, “Carry On.”

“The ‘no such thing as nothing’ line comes from the concepts that humans don’t really have a flat line until we’re dead. If we are not leading a happy productive life, we are leading probably an unhappy non-productive life. If a person doesn’t have enough food, they actually are hungry. If they don’t have enough money it’s not that they have no money, they actually have something and it’s called poverty. There’s no just kind of flat lining coasting. You’re either going in one direction or in another direction. All that came out of me trying to imagine why somebody would be, for example, a suicide bomber.”

The music industry mourned his sudden death online. Elton John tweeted, “Shocked and saddened by the sudden death of @chriscornell. A great singer, songwriter and the loveliest man.”

KEXP, Seattle’s popular independent radio station, paid tribute to Cornell throughout Thursday morning. The station played non-stop songs from Soundgarden and Cornell’s other bands and solo work, as well as artists who covered Cornell’s material and those who were influenced by him.