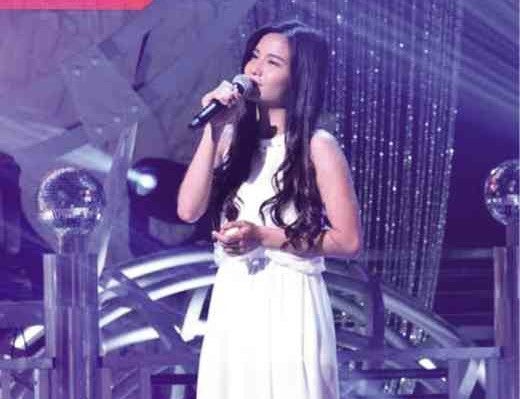 TOKYO—“I did my best to make the song my own,” said Krissha Viaje, who competed here with 10 other representatives from around the world in the biannual singing contest “I Can Sing in Japanese” (ICSIJ).

Krissha, a member of the all-Filipino group Girltrends, said she felt “relieved” after performing in front of an estimated 1,500 viewers at the Tokyo International Forum in Chideyo.

ICSIJ, first aired on Nippon TV in 2011, is similar to the Filipino weekly reality show, “I Love OPM,” that features non-Filipino performers singing Original Pilipino Music (OPM). But, the latter premiered on ABS-CBN only in 2014.

“It was nerve-wracking to perform in front of the judges and so many audience members. I get very nervous every time I join competitions, so maybe next time, I’d have to just let it go and relax more,” Krissha told Asian journalists shortly after the ceremony. “Given a chance, I’d like to sing to the Japanese people again next year.”

Krissha represented the country—and Southeast Asia—during the grand finals held in April. She bested 11 others during the Asia-wide preliminaries conducted in February for ICSIJ by the Asian entertainment channel, Gem.

Incidentally, Krissha’s first venture into Philippine show business was also by way of a singing contest—“Little Big Star,” where she placed second in the show’s Big Division during Season 2.

“My ultimate dream is to become a well-known performer. I appreciate the support that my friends in Girltrends are giving me. They say they’re proud of me no matter what happened here,” she pointed out.

Speaking at the press conference after the program, grand winner Neeraja said that while she had performed professionally in classical concerts in India, ICSIJ was the first-ever contest she had joined.

Her interest in Japanese music began with manga, a form of Japanese comic books and graphic novels.

“India isn’t much into Japanese stuff, but we have a community that regularly gathers for karaoke nights,” she shared with reporters.

Dimas, who spoke on Rijchary’s behalf, said: “We’re very happy to have been given this chance. The contest made us realize that music connects us all, indeed.”

Unlike in India, Dimas said Japanese songs are popular in Peru. “When we play them to sightseers in Machu Picchu, people stop to listen. We’re constantly looking for new material to sing. Like Peruvian music, Japanese songs are full of love.”

Recalling the past 16 ICSIJ editions, producer Yuji Gobuichi said: “I feel it was during the show’s latest edition that we had showcased the highest level of talents so far. I noticed that members of the live audience had tears in their eyes—which meant that the performers were able to connect with them.”

Nippon TV conceptualized ICSIJ in 2011 to entertain grieving survivors following the magnitude-9 earthquake and tsunami in Tohoku that killed over 15,000 people.