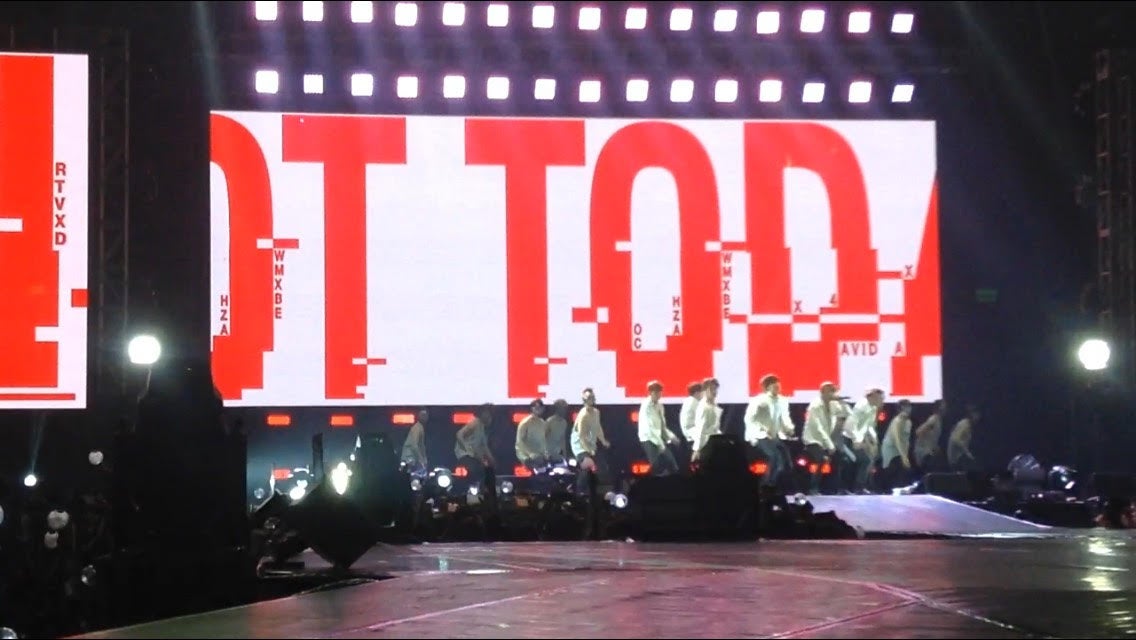 Last May 6 to 7, fans from all walks of life gathered at the Mall of Asia Arena to witness once more global sensation K-pop group Bangtan Sonyeondan (BTS) set the stage on fire.

The septet group—composed of Rap Monster, Jin, Suga, J-Hope, V, Jimin and Jungkook—returned to the country after a year and held their two-day Manila leg concert for “2017 BTS Live Trilogy Episode III: The Wings Tour.”

The two-day sold out concerts were a mix of powerful dance performances, breathtaking solo stints, loads of fan service, and some Tagalog surprises for their beloved Philippine “A.R.M.Ys”—as they fondly called their fans.

Donned in their best “ootd,” fan-made BTS shirts, blinking headbands and other concert paraphernalia, fans were early at the concert venue for varied pre-concert activities.

Fans fell in line for the tour’s official merchandise selling. Several others lined up to have a picture with their bias’ standee.

Some PH A.R.M.Y.s went to search for fan sites and bought their favorites’ slogan banners.

Before the concert began, BTS music videos were played on loop with fans singing along, waving their A.R.M.Y Bombs (their fanclub light sticks).

As the huge backdrop fell, the members loomed on stage, standing on different leveled platforms, accompanied by stunning fire stage effects as they pumped the arena with starter “Not Today.”

More than 20 songs of their hits, medley, and solos combined

They hit the stage with their most popular tracks from past albums like “Baepsae (Silver Spoon),” “Dope,”“I Need U,” “SAVE ME,” and “Fire.”

The group also had a medley of their older songs “N.O,” “No More Dream,” “Boy In Luv,” “Danger” and “Run” and dispersed around the extended stages while singing.

Rap line displayed their rapping skills with “Cypher Pt. 4” and donned themselves in expensive looking cloaks while vocal line serenaded the fans with “Lost.”

BTS also showcased for the first time songs from their “Wings” and “You Never Walk Alone” albums such as “Am I Wrong,” “21st Century Girl,” “Blood Sweat & Tears,” and “Outro: WINGS.”

The septet group unleashed their individual flavors—vocal, rap, dance skills—when each of them took turns in performing their solo acts.

The youngest member Jungkook went first with “Begin,”—a song dedicated to his older brothers from BTS—displaying his incredible footwork and great vocal skills.

Member Jimin danced powerfully to his song “Lie,” even putting on a blindfold in between the song. His stage was enigmatic with a chandelier hanging from the top.

Rap line member Suga rendered an emotive performance of his song “ First Love”—with lyrics tackling his piano from childhood—and was accompanied by a grand piano on stage as he rapped his heart out.

V highlighted his solo “Stigma” with his much awaited high notes that did not disappoint fans.

J-Hope’s solo act “MAMA”—a song dedicated to his mother—was pure fun and heartwarming. The 94-liner charismatically took the stage while his childhood photos were being flashed on the LED screen.

Jin melted every fans’ hearts with his beautiful, melancholic voice as he sang “Awake.”

During their two-day concert, the genre-bending group showcased their Tagalog skills.

“Nag-enjoy ba kayong lahat? (Did you all have fun?)” Leader Rap Monster asked which earned him a roaring crowd.

Another member J-Hope encouraged fans per sides to scream their lungs out saying “sumigaw (shout).”

Later on, he invited everyone to scream as a whole. 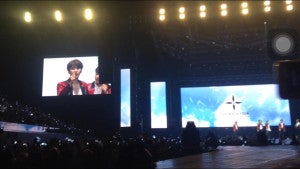 Younger members Jungkook and V had long ending messages in our vernacular too that shook the whole arena.

He also added not to forget that BTS and A.R.M.Y.s are always together even if they are bounded by space.

Bubbly member Jimin seemed to not get over PH as he mentioned that he was happy to return to Manila. “Masaya akong bumalik sa Manila.”

This is one of the most notable Tagalog words to remember from the global sensation group during their two-day concert here.

“Kayo ang aming pakpak.” Member J-Hope translating the word wings to our own vernacular counterpart to put emphasis as he impersonated a bird flapping its wings.

This action earned him some laughs but those words definitely hit right in PH A.R.M.Y.s’ hearts.

.@BTS_twt Throwback to the 💚💗Spring Day Ocean last #WINGSTourInManila Day 1 made possible by @wonhaemanila and the PH ARMYS ✨#BTSBBMAs pic.twitter.com/BXwifa324l

PH fans prepared fan projects for both Day 1 and Day 2 in Manila.

During Day 1, when BTS sang “2!3!”—a song for A.R.M.Y.s, fans wrapped their light sticks in purple plastics creating a purple ocean.

Whereas during “Spring Day,” fans covered their light sticks with pink and green plastics to produce a wonderful pink ocean with touches of green, as a reminder of flowers blooming in Spring.

Aside from the ocean fan projects, the boys noticed the banner fan projects for both days. Some members even took and held them while showing the banners to everyone.

Rap Monster, in particular, mentioned one banner project with his line from “Run.”

The phenomenal group wrapped their concert with chart-topper “Spring Day.”

After the performance, lights dimmed while the boys were seen shedding their last song’s attire, revealing their “Wings Tour” shirts.

BTS bowed to each sides of the arena and dispersed one last time to interact with their fans from all parts of the stage.

“Wings Tour” is BTS’ third solo concert in the country.

And as member Suga has mentioned, “Wings Tour” here is sold out once again, so maybe we can hope their next tour would include the Philippines again too.

“2017 BTS Live Trilogy Episode III: The Wings Tour” in Manila is brought to us by PULP Live World Productions.