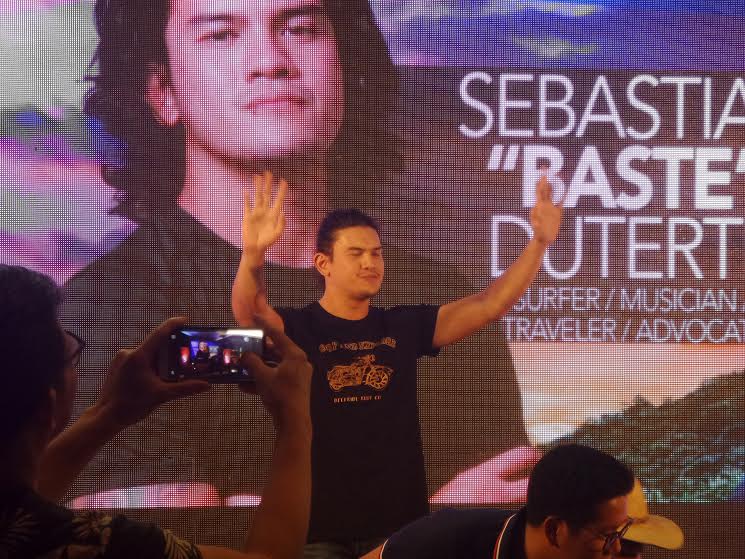 Baste Duterte waves to fans and photographers during the May 10, 2017 launch of his TV travel reality show, Lakbai, on TV5. Lakbai will premier on May 21, 2017, nighttime. (PHOTO BY ARMIN ADINA / INQUIRER)

Sebastian “Baste” Duterte has been bitten by the show biz bug.

The 29-year-old bachelor and youngest son of President Duterte will be featured in an eight-part “adventure-travel-reality” television show titled “Lakbai” on TV5.

“I could no longer resist. I decided to give show biz a try,” the young Duterte said in Filipino at the show’s launch at Aracama at the Bonifacio Global City in Taguig City on Wednesday night.

He confessed that show biz denizens did not have a hard time luring him in. “They didn’t convince me. This was my decision. I could use the income,” Duterte said.

“If this doesn’t work out, I can always go back to Davao,” he said.

TV5 head of programming Mell Yazon-Tolentino told the Inquirer that the station approached Duterte for a TV project, and arrived at the reality format.

“It took us several months of negotiations,” the TV executive said. “There’s a close collaboration with Baste. You will see in this show a different side of him,” Tolentino said.

“[Duterte] will show us places we have never seen before. The show is real, comfortable, easy to relate to. Just like your own barkada trip, you feel happy after watching this show,” Tolentino said.

Read Next
Piolo finds prenup ‘offensive’
EDITORS' PICK
vivo brings to the Philippines a powerful smartphone with a slimmer body, the vivo Y02s for only PHP 6,499
Apple warns of flaw that lets hackers into iPhones, Macs
46% of schools nationwide to have full face-to-face classes on Aug. 22
House energy committee chair Arroyo bats for cheap electricity
What to watch out for when selecting a video surveillance solution
Heads may roll at BOC, says Palace if sugar smugglers are allowed to use recycled import permits
MOST READ
DepEd to give teachers P5K cash allowance within first week of classes
LOOK: Miel Pangilinan dazzles in glittery pre-debut shoot
DOJ indicts bank officer in $2.1 billion Wirecard fiasco
PH importing sugar after all: Marcos okays 150,000 MT
Don't miss out on the latest news and information.