Sen. Sotto had irked netizens after joking about mothers having kids out of wedlock during Social Welfare Secretary Judy Taguiwalo’s confirmation hearing. He called single mothers like Taguiwalo as “na-ano lang (merely got laid).”

After Sotto’s quip, critics reminded him that even his own daughter is a solo mother; Ciara split with businessman Jojo Oconer in 2016 following third-party rumors. They have a son, 2-year-old Crixus.

On Thursday, Danica, the daughter of Sen. Sotto’s brother Vic, pleaded with bashers to leave Ciara and her son out of the mess and respect their private space. 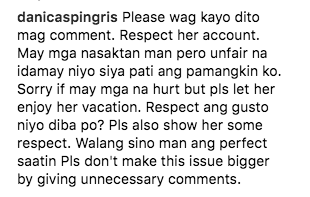 Since the incident erupted, Sotto has formally apologized and said it was just a joke.  Gianna Francesca Catolico /ra