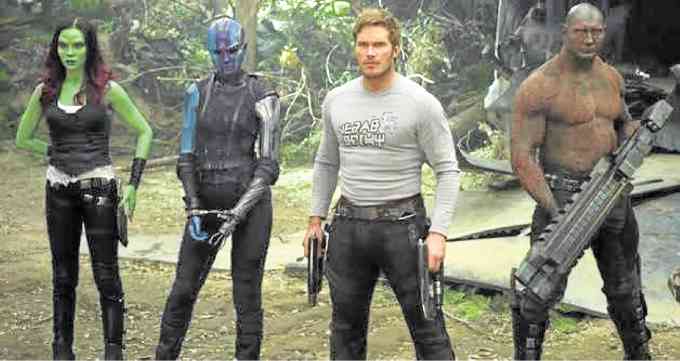 Guardians of the Galaxy Vol. 2” often feels like a forced and self-conscious sequel, but it makes you care deeper about characters we barely knew before. And while it has less unpredictable conflicts, the collective drama is amped-up and more permeating, overpowering even the grand combat sequences set in mesmerizing dreamscapes.

The Marvel Studios film doesn’t scrimp on special effects—there’s a tremendous amount of detail, as well as painstaking digital artistry in almost every scene. But, the heroic space misfits’ dynamic improves. Their metamorphoses, while contrived, have satisfactory results.

Director James Gunn’s second sci-fi-action flick zeroes in on the bonds of its members and successfully tests them further, their personalities aptly becoming more complex:

It’s a simpler offering, despite the stunning imagery—one would expect a senses-shattering epic, after the space adventurers’ debut in 2014. Not that there aren’t threats in “Vol. 2” on a galactic scale, but problems are far too easily resolved, and the sense of danger isn’t entirely there.

Star-Lord’s estranged ally, the antihero Yondu Udonta (Michael Rooker), however, becomes a fully developed character. He was underused before like Nebula, but they both shine here.

As for Ego, it was mentioned in the first film that Star-Lord’s dad was something of a jerk—so his presence is suspicious from the get-go. The revelations don’t disappoint, but they’re perfunctory.

In the bigger scheme

of things, the now-popular Guardians will figure prominently, according to reports, in the third “Avengers” film in 2018. This sequel also helps expand the cosmic lore of the live-action universe, introducing figures and ideas from the comics anew.

Speaking of expansion, there are five extra scenes at the end, but only one is of real consequence, and that arc will undoubtedly be picked up in the eventual crossover with the Avengers.

The film has pleasantly surprising cameos by popular actors, although they don’t feel as significant as they should’ve been. It often appears like “Vol. 2” has a need to show off and is painfully aware of its previous success.

Despite that, it deserves to be seen on the big screen—the imaginative, painterly visuals are truly glorious. Moreover, the character-driven sequel connects effectively with human drama, despite its strange and otherworldly conceits.