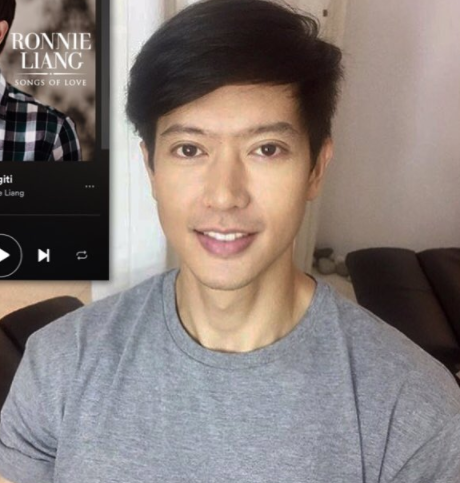 One of the most successful products of reality talent searches, Ronnie Liang has become known for his breakout hit “Ngiti,” which paved the way for his success in the musical scene.

Since the mega-hit OPM (Original Pilipino Music) song was released in 2007, his life has changed. After his stint at ABS-CBN’s Pinoy Dream Academy, he went on to become one of the country’s premier OPM artists.

Thankful for the efforts of Universal Records in promoting the song then, “Ngiti” became a household melody that was later used in TV series, movies and even for a commercial.

It became the theme song for ABS-CBN’s “Hiram na Mukha” top-billed by then love team Heart Evangelista and Geoff Eigenmann. Also, it was used as the soundtrack in movies such as “A Very Special Love” (Sarah Geronimo and John Lloyd Cruz) and “You to Me Are Everything (Dingdong Dantes and Marian Rivera).

The song, because of its mass appeal, was also used for the commercial of a famous toothpaste brand. Most recently, it was used as the theme song of the phenomenal love team Alden Richards and Maine Mendoza in Eat Bulaga’s kalyeserye.

Despite the success of the song, Liang gives full credit to its composer, Vince Katindoy, whose life dramatically changed when “Ngiti” hit the airwaves.

“Nagpapasalamat siya na kinanta ko yung song niya, may bahay na siya, every three to six months, unstoppable yung check niya (He [Vince Katindoy] is very thankful that I sang his song, and because of this he was able to buy a house; every 3 to 6 months, his checks come unstoppable),” he said at his post-live interview after guesting at Inquirer ShowbizLive on Wednesday.

He even shared a funny story proving how the song captured even the international market. It was in a show in Japan that he could not forget a Japanese national who surprisingly sang part of “Ngiti” perfectly.

“Kinuha niya yung mike, siya yung kumanta nung second verse, yung accent maayos, pati chorus kinanta niya (He got the mike from me and sang the song’s second verse with a really good accent; he even sang the chorus part),” he recalled.

Currently, Liang has two albums out entitled “Ronnie Liang Songs of Love” and “May Minamahal,” both available on record bars nationwide.