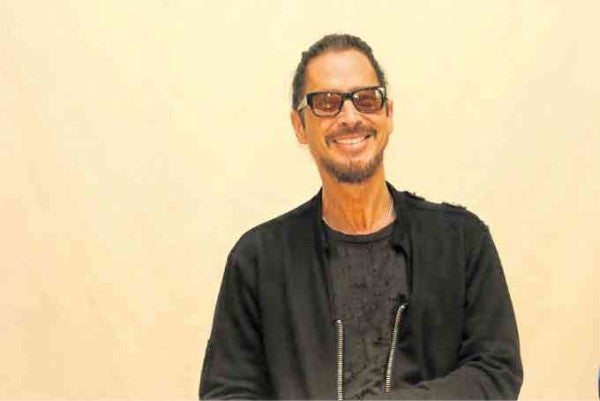 LOS ANGELES—Chris Cornell recently gave us an update on the progress of the new Soundgarden album in the works and the band’s coming tour.

The man, ranked as one of the best rock vocalists of all time and is noted for his four-octave vocal range, also talked about composing and performing the theme song for “The Promise,” the historical drama about the Armenian Genocide, starring Christian Bale.

Credited as one of the leaders of the 1990s grunge movement, Chris founded Temple of the Dog, which released one eponymously titled album.

Last year, Temple of the Dog toured to sold-out venues to commemorate the 25th anniversary of their one and only album.

Last January, the rocker, whose real name is Christopher John Boyle, reunited with the supergroup Audioslave after 12 years and three albums to perform in an anti-Trump concert. He and the band earned three Grammy award nominations before they split.

The 2012 Golden Globe best song nominee for “The Keeper” also composed “You Know My Name” for the James Bond movie, “Casino Royale. ”

The Seattle-born singer-songwriter, interviewed in LA, said he now lives in New York and Rome with his Greek wife, Vicky Karayiannis, with whom he has two children, Toni (born in 2004) and Christopher Nicholas (2005). He and Vicky, whom he met in Paris where they used to reside, head a foundation that helps protect vulnerable children around the world. With his ex-wife Susan Silver, he has a daughter, Lillian Jean (2000).

Can you give an update on the Soundgarden album in the works? We’re in the middle of songwriting. And the end could be really quick, or it could be another year.

Will you tour for that album? For sure, with the album, we’ll tour. We’re actually touring in the US at the end of April, for a month.

How did that tour last November with the Temple of the Dog come about? It was something we hoped we’d be able to do at some point—and we were able to finally put it together. Hopefully, we’ll do it again.

Were you surprised at how successful the tour was? All the dates were sold-out. Yeah, I was very surprised. We made one album 25 years ago and never supported it.

What was the genesis of your song for “The Promise”? There was a connection that my wife’s family, who’s Greek, had with the family of producer Eric Esrailian, who’s Armenian. My wife’s grandparents, when they were children, were Greek refugees who survived that policy of the age. So, it was from conversations that we had. Our friendship was partly based on that history.

The film was screened in the Vatican. What was that like? Eric presented it. Because I live in Rome, I’ve taken my children to the Vatican and spent a lot of time wandering around outside. I always wondered what it would feel like going inside. So, screening “The Promise” [in the Vatican] was a very emotional day.

It was overwhelming because we did a short tour of the Vatican library, and we walked around inside the grounds.

There were security concerns because, as our film group was walking, suddenly we were in the way of the party of Prince Charles, which was trying to drive down the same road. It was surreal but exciting.

What does music mean to you? I can’t separate myself from music. I actually have memories even when I was in the crib. I think the reason why I have those memories from being 2 years old is because there was music or melodies involved. I remember records, and the song my mother would be playing while I was in the crib.

Your specific childhood memories are very interesting. What do you talk to your children about music? Music has been a part of my children’s lives.

I can’t compare my relationship to music with theirs because they’ve had a different experience. But I made a point of not telling them what to listen to. My daughter Toni has an unusual list of artists and songs she listens to.

This film must resonate with you because of your humanitarian concerns. The initial discussions about the film that I was having with Eric spawned from me being a father and going through periods of stress, waking up in the middle of the night, and being aware of the different political tensions in the world. I never had that fear before. I thought of my responsibility about the welfare of my babies.

My wife and I always wanted to do something to give back to the community, because we’ve been very fortunate.

First and foremost that came to mind for us were children and doing whatever we can to protect the most vulnerable ones.

How did Paris and Rome enhance your musical creativity? They immediately changed the way that I thought. First, meeting my wife in Paris, then actually living there. For me, as an American born and raised in the US, it was good to finally see how the US looks through someone else’s eyes.

And to hear the conversations and see the perspective outside the US, that’s natural, honest and not filtered through US propaganda or media.

Then, [there’s] the difference in the culture. I was born and raised in Seattle, Washington, which is one of the newest cities in the US. It’s like 180 years old. So, living in a city like Rome is completely the opposite—and amazingly inspiring.

As an artist in Paris or Rome, when you step out the door and look in any direction, your breath is taken away.

Do you speak Greek now? No. I understand a little. But I don’t let on how much I know so I can listen to private conversations (laughs).