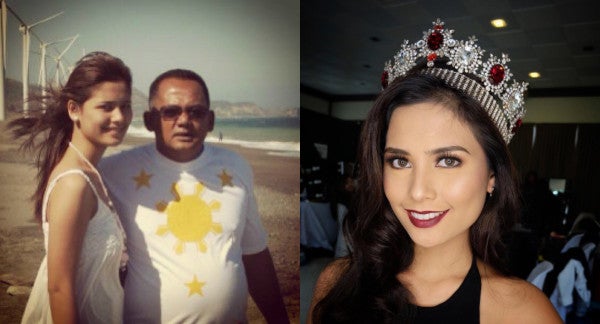 Miss World Philippines 2015 Hillarie Danielle Parungao penned a touching tribute to her father Edmundo Parungao, who passed away last Tuesday, April 18, after allegedly shot himself to death inside a police station in Solano, Nueva Vizcaya. He had been arrested for alleged possession of sachets of shabu.

In a lengthy Facebook post on Friday, the beauty queen-model reminisced her relationship with her father, who was previously an overseas Filipino worker. “My dad worked in Taiwan when I was very little and I only know him through pictures and letters. I must say, my modeling career started when he asked my mom to constantly send him our photos,” she wrote.

“This picture was taken when he came back from overseas; I finally have a face of my father.I was stunned to see my dad in person. To finally put a face on the man I have loved through photos, paid phone calls and cassette tape recordings.”

Then, she narrated her first memory of her father—when she witnessed him weep outside their home.

“I followed him everywhere around the house without him knowing, hiding behind his shadow. Reluctantly, I came close to him only to see that he was tearing up. It broke my heart terribly,” Parungao added. “A father that he was, he didn’t want me to see him crying and asked me to get him a match for his cigarette. I obliged and hurried back to him. Looking up with my eyes asking him, he gave me a smirk and told me to go back in. But I stood there just watching him.”

“I kept that first memory vividly because at that very moment I told myself that I will never want to see my father cry again…I’m broken [and] I will always be and no one or nothing can ever mend my heart, but these words give me comfort,” she concluded her post.  Gianna Francesca Catolico /ra