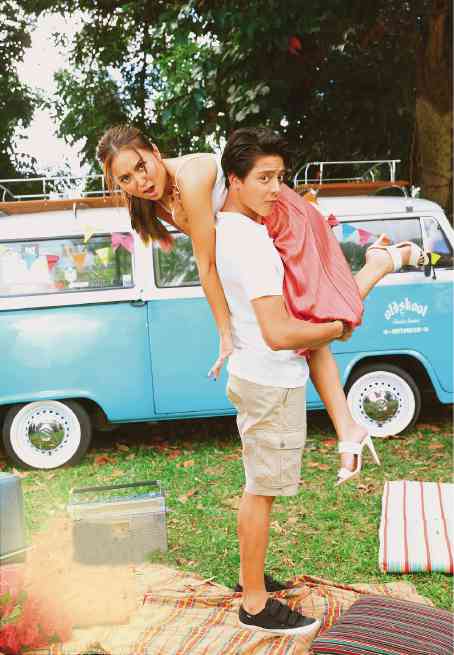 Can’t Help Falling in Love,” the latest rom-com starrer of the KathNiel tandem of Daniel Padilla and Kathryn Bernardo, heavily banks on a ridiculous premise.

Inebriation has apparently turned the indecisive bride-to-be into a woeful amnesiac—who has barely a year to set things right. Surely, you can’t forget something as life-changing as that, can you?

But, the film’s silly confluence of convenient serendipity is par for the course in mainstream cinema’s cookie-cutter Rom-Com Heaven.

So, as expected, it doesn’t take long for Gab and Dos to realize that their salt-of-the-earth tastes and preferences are better-suited for each other.

Thereafter, Gab spends the rest of the movie’s running time mulling over the torturous Solomonic choice she has to eventually make as Daniel’s nasally rendered cover of Elvis Presley’s 1961 ballad (from “Blue Hawaii”) plays in the background.

Will Gab choose Mr. Perfect over Mr. Right? Does she find “strong and stable” more appealing than “spontaneous and exciting”?

Even more importantly, is she ready to give up personal growth in lieu of a lifetime of luxury and comfort?

If she lets her head rule over her heart, Gab probably would—but, not if the production’s movie-going miron and cinematic thrill-seekers can have their druthers. Otherwise, how else can KathNiel’s latest screen fairytale make their followers’ romantic fantasies come true, even temporarily?

But a film’s gorgeous vistas can quickly overstay their welcome if they aren’t anchored on a significant tale. And it doesn’t help that the people around Dos and Gab treat their “marital dilemma” as a joke—or an opportunity to play to the peanut gallery.

Mired in formula and marred by clichés, the movie ends up going by the numbers. But the delights of this trite but charming crowd-pleaser gather steam as Daniel’s maturing thespic skills keep the story’s contrivances—and less-than-imaginative script—at bay.

To be fair, Kathryn works hard to keep up with her perpetual screen consort, and her hard work almost pays off—but, her enthusiastic portrayal lacks the ebbs and flows required to convey nuance, texture and genuine gravitas.

For his part, Daniel’s spot-on performance demonstrates that his career-boosting turn in last year’s “Barcelona: A Love Untold” was no fluke—and, this time around, the 21-year-old actor doesn’t just prove his growing confidence in acting by way of “manufactured” dramatic scenes that are “makabagbag-damdamin” showy, but in breezily handled, subtly staged and kilig-inducing light comedic moments, as well.

Daniel’s adorable turn vastly benefits from instinct and intuition—and that’s all to the good. He knows how to have fun with the fan-pandering sequences. And he doesn’t cry just for the heck of it, so the tears he sheds are well-earned and much appreciated. He knows when to take things seriously—and when to turn on the charm.