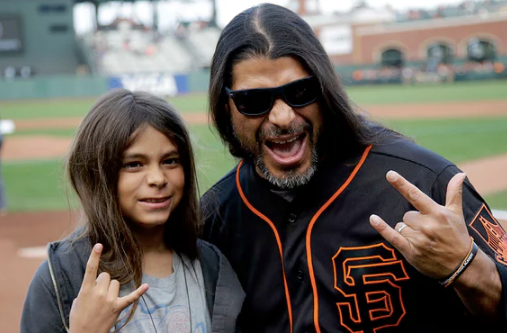 Music runs in the blood, and it certainly is evident for Tye Trujillo, the 12-year-old son of Metallica bassist Robert Trujillo.

According to Huffington Post, the talented, long-haired youngster will play bass for nu-metal band Korn in their upcoming South America tour.

The exciting news of Tye’s temporary designation was confirmed by the band’s official Facebook page earlier this week, as regular bassist Reginald “Fieldy” Arvizu won’t be able to make the trip.

“We are bummed Fieldy can’t join us on this run but excited to do a few gigs with a young player like Tye,” the post said. “We look forward to welcoming our brother Fieldy back when we return to the States in May”.

Living up to the family name, the young Trujillo  is currently the bassist of the rock band called “The Helmets”—composed of members his own age.

His guitar playing prowess and head-banging skills were on full display during a guesting in the morning show Good Day Sacramento, while his famous dad has also played with him live onstage in the past. Check out the clips below. Khristian Ibarrola/JB