Bale talks about his co-stars in ‘Dark Knight Rises’ 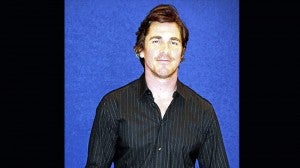 LOS ANGELES – Christian Bale was in a good mood in our recent interview with him. The actor, who can be terse and very serious, was all smiles throughout our talk.

Christian refused to answer some questions in previous interviews, but in this chat at the Montage Hotel in Beverly Hills, no such moment came. He revealed new details about “The Dark Knight Rises” and shared his thoughts about director Chris Nolan and some of his costars, including Anne Hathaway (Catwoman), Tom Hardy (Bane) and Joseph Gordon-Levitt (John Blake).

The 2011 Oscar and Golden Globe Best Supporting Actor winner for his terrific work in “The Fighter” dished about his upcoming two films that reunite him with his “The New World” director, Terrence Malick (whom he calls Terry). He also shared his personal insights about working with Zhang Yimou in China in “The Flowers of War,” a Best Foreign Film contender in this awards season.

First on our topic list was his new “Dark Knight” castmates. Since it’s quite a long list of accomplished actors, we asked him to zero in on Anne, Tom and Joseph.

“I had plenty of scenes with Anne,” Christian began. “And I was there when we did the screen test for her. The thing that I said to Chris [Nolan] that day was that there were many very accomplished actresses who had read for the role. I’m terrible at auditions, so I’m very impressed when somebody really seems to acquire an ownership of a character without having worked on it or prepared for some amount of time.”

“I saw that in Anne,” he added. “When Chris watched the screen test, he agreed that Anne did a wonderful job. In many ways, she has the hardest job. There are a number of people who feel that the Catwoman role has been defined previously. So, I always saw Anne’s role as being the toughest job of any of us. In my case, I’ve stopped referencing outside sources. I now reference Chris’ own world of Batman as a guide to what I will continue doing.”

He raved about Tom Hardy as “a phenomenal actor. I like working with him a great deal. He goes the whole hog. I know that Bane has been seen in movies before. But, in my eyes, Tom is essentially creating Bane for the first time so there’s great freedom for him to be able to do so.”

“Joseph is a very intriguing guy,” Christian said of the actor who last worked with Chris in “Inception.” Coincidentally, so did Tom. “I would see Joseph’s performances in other films while we were filming. He’s somebody who truly seems to love acting. He’s a good, smart guy. He did a very good job in the movie.”

Christian announced that this could be his last time as the masked vigilante whose secret identity is Bruce Wayne, an American billionaire who as a child witnessed his parents’ murder, leading him to a life of revenge on crime. “I wrapped a few days ago so that will be the last time I’m taking that cowl [Batman hood] off,” he said. “I believe that the whole production wrapped yesterday, so it’s all done. Everything’s finished. It’s me and Chris – that will be the end of that Batman era.”

Christian admitted that playing Bruce Wayne “was enjoyable.” He explained, “We always maintained from the beginning that if you wanted to break it down, there are three personas – Batman is sincere, the private Bruce Wayne is sincere. The public version of Bruce Wayne, the playboy, is a completely fabricated performance.”

On other news about him, Christian confirmed that he will be making two movies with Terrence Malick, “Lawless” and “Knight of Cups” [Cate Blanchett is in both, too]. Smiling, with a hint of irony about Terrence’s reputation for taking extended periods of time to finish his films, the actor said, “Terry is going to defy all expectations, and we’re going to fly through those movies.”

In Yimou’s 1937-set “The Flowers of War,” Christian plays an American, John Miller, trapped in the besieged city of Nanking when it is invaded by the Japanese army. He is forced to pretend to be a priest as desperate civilians – schoolgirls and courtesans – seek refuge in a cathedral. An act of heroism inspires the disparate group to fight back.

On the difference he noted in filming away from Hollywood or London, Christian said, “Maybe it’s just the set-up that they have in China. Or, maybe, it’s because Yimou is the preeminent director there. So, there’s this autocracy. He will decide what is going to be shot at any given time. No need to explain it to anybody else. No producers get to differ with him. It could be a dictatorship, but Yimou is a very warm-hearted guy, so it never became that.”

“There are no unions for the film workers, so it’s seven-day work weeks,” he added.

“The speed with which everything got done was phenomenal, especially in terms of the set construction – the size, the grandeur of it.

“I arrived on the set and there were two sound stages which I assumed had been there for years – but no, they were built just for this movie.

“They built enormous acres of streets to replicate Nanking. They built a cathedral that wasn’t just a façade – it was made of concrete. This thing’s going to be around for 100 years. I found that phenomenal – the ability to get all of that done.”

He offered personal insights into the renowned Asian filmmaker, with whom he communicated via translators: “Yimou is one of the calmest directors I’ve ever come across. He never panics. You never see him worry. It doesn’t matter what problems are presented to him. He’s got a great sense of humor.

“We make each other cry with laughter and, half the time, we didn’t even know exactly what it was we were laughing about. You just get a feeling of kinship with him. He’s a master at what he does. He’s been doing it for so long.”

The film’s subject of heroism led to talk about his personal heroes. “Surely, my father,” he quickly said. “He was always the person that I looked up to, I compared and judged things against. I always thought about what he would consider and do.”

Surrounded by women in his family life – Christian has three sisters and a daughter in addition to his wife – he volunteered that he revels in their presence.

“The women in my family are the strongest bloody women that you’ll ever come across,” he remarked. “You don’t mess with them, and I like that very much. It’s the kind of absolute, caring maternal side, mixed with the phenomenal capability that some women are able to harness, and the strength they have. They’re very feisty ladies. It’s what I am accustomed to, and it’s what I enjoy!”