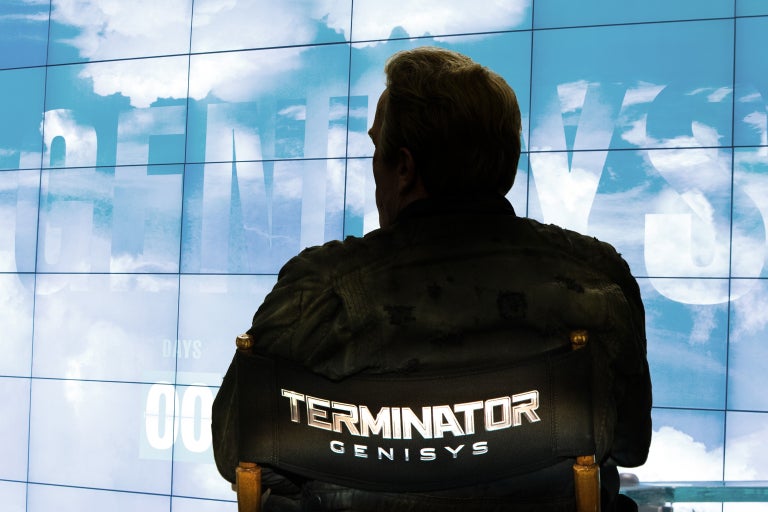 Arnold Schwarzenegger, here seen at a promotional event for “Terminator Genisys”, in which he co-starred. Image: Paramount Pictures Corporation via AFP Relaxnews

The Guvnor has expressed an interest in returning to the “Terminator” franchise, as long as “the story is written well and it really entertains the whole world.”

He also pointed out that franchise creator James Cameron, who wrote and directed 1984’s “The Terminator” and the 1991 sequel “Terminator 2”, would soon regain control of its future.

“Remember that after 2018, James Cameron is getting it back, and then it will continue on!” said Schwarzenegger. “I’m always looking forward to doing another Terminator, especially if the story is written well.”

A fifth film in the series, the timeline-splitting “Terminator Genisys”, was released in 2015 and made $440 million worldwide against a production budget of $155 million.

Schwarzenegger was speaking ahead of the simultaneous release of “Aftermath”, based on the 2002 mid-air collision above Überlingen, Germany. Co-starring Scoot McNairy (“Gone Girl”), Maggie Grace (“Taken”, “Twilight Saga: Breaking Dawn”), and Martin Donovan (“Legends of Tomorrow”), it releases April 7 in theaters and through video-on-demand services.

Director Elliott Lester previously steered “Nightingale” for HBO, which was nominated for an Emmy, while lead actor David Oyelowo won a Black Reel award and was likewise nominated for a Golden Globe and an Emmy. JB