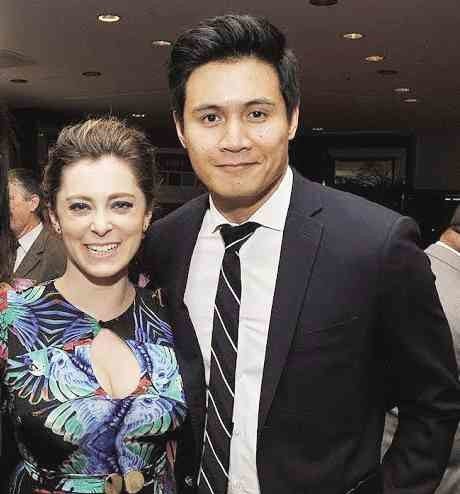 LOS ANGELES—“It’s important to me that the show is as accurate as possible with the Filipino stuff,” stressed Rene Gube, who is one of the writers of “Crazy Ex-Girlfriend,” the comedy-musical TV series where he also acts as Father Brah. The CW show has been hailed as the first series to portray Fil-Am life, with a number of Filipinos in the cast, on primetime US television.

Rene, the son of immigrants from Batangas and Pampanga, is also an actor. In the show that stars Rachel Bloom (she and Aline Brosh McKenna are creators), he plays chill and compassionate Father Brah, with whom Josh Chan (Vincent Rodriguez III) shoots hoops and has heart-to-heart talks.

Josh is the Fil-Am character that Rebecca Bunch, as delineated by Rachel (who won a 2016 Golden Globe for her performance) obsesses on. She gives up a chance to be a partner in a top New York law firm to follow Josh in West Covina, California, where he and his family and many Filipinos live.

“I hope to see a lot more of Josh’s family (in the coming episodes),” said Rene who’s responsible for the Filipino storylines, including the groundbreaking episode that featured Thanksgiving, Pinoy-style, in 2015, and the one where Lea Salonga showed up as Josh’s Aunt Myrna at his sister Jayma’s (Tess Paras) wedding. Fil-Ams in the cast include Coryn Mabalot and Albert Isaac.

Rene also wrote and acted on TBS’ “Ground Floor,” where he played a character named Threepeat. Of this stint, he told Vulture magazine: “I fought all year to get one joke in that identified me as a Filipino. I saw how much that meant to Filipino people on Twitter, and I can relate because growing up, there were only Rob Schneider and Lou Diamond Phillips.”

Born in Waukegan, Illinois, but raised in San Diego, California, Rene developed his interest in performing when he signed up for the speech and drama club at Mount Carmel High School. He earned his BA in political science at the University of California, San Diego. Before Hollywood claimed him, Rene taught history at the Belmont High School in downtown LA.

As a comedian, Rene still performs every Friday with his comedy sketch group, JV, at the Upright Citizens Brigade in LA.

Rene and his wife, Briga Heelan, who’s also an actor and a comedian, are expecting their first child—a girl—“any day now.”

How would you describe your journey as an actor so far? When I was 21, I was in an arguably racist but definitely “exoticizing” production of Shakespeare’s “A Midsummer Night’s Dream,” where the director’s “take” was to substitute all of the classical elements of fantasy and magic with multi-Asian things: Japanese kabuki masks, Chinese dragon robes, Korean drums and a gong.

I auditioned for the role of Lysander, but was cast as Henchman #4. Accompanied by Henchman #3, I would carry onto the stage Oberon (played by a 230-pound white guy wearing a kimono and smokey-eye makeup) by his sweaty feet. Things have gotten better since then.

How do you prepare for an audition? Any good luck rituals? I rehearse with my wife, who’s brilliant. Then, I make myself a matcha green tea, because those things will get you zoinked.

How do you handle rejection? I handle rejection viciously. You know that wooden dummy Bruce Lee brutally trains on in “Dragon: The Bruce Lee Story?” I have one of those in my basement, and I just go to town on it. I get in there and cry to it.

Have there been times when you almost gave up? What motivated you to keep trying? I make so much fricking money pirating … screeners.

Honestly, what kept me motivated in the toughest times was having a tight crew.

What’s your stand on whitewashing—or the casting practice in which white actors are cast in nonwhite character roles—in Hollywood? It’s pretty whack. But they paid for the movie, so they can do whatever they want.

To people who are planning to pursue acting, what should they prepare for? You should have an earthquake kit and water for three days. Traffic is fine; just get into podcasts. Know that it’s going to be a long road. So don’t panic.

What satisfaction do you get from writing that you don’t get from acting? The best part about television writing is I get to hang out with writers all day. Our job is to sit in a room and bash our understanding of the world against each other until we get to the end of a script … I always come out on the other side a more empathetic human.

Rachel Bloom told me about how detail-oriented you are about the Filipino aspects of the show. How Filipino was your upbringing? It’s important to me that the show is as accurate as possible with the Filipino stuff. I remember watching Gene Cajayon’s “The Debut” in a movie theater when I was in college and the moment they walked into the house, we caught a glimpse of the big wooden spoon and fork hanging on the wall. The audience cheered for the set dressing. Because seeing ourselves on a big screen somehow validated our experience in and contribution to America.

My upbringing was as Filipino as one can get, being an American-born Pinoy raised by two Filipino immigrants. We had rice with every meal. We took our shoes off at the front door. We treated our dozens of cousins as extra brothers and sisters.

Read Next
Now you see them, then you don’t
EDITORS' PICK
Notice of 2020 regular meeting of stockholders June 18, 2020
SM prepares for ‘safe malling’
Leveling up your ‘lutong bahay’ with the kitchen companion you never knew you needed
NBI, Immigration to join hunt for ‘underground’ medical clinics
2 Chinese nationals arrested in raid on another unlicensed COVID-19 hospital in Pampanga
P2.2 trillion in losses: Cost of COVID-19 impact on PH economy
MOST READ
Revillame tells Roque: ABS-CBN is in my heart despite being in rival network
NCR is ready for GCQ — Palace
LOOK: Robredo, Vico Sotto, check Community Mart ops in Pasig
Año: Quarantine passes not needed in GCQ, movement restricted to essential travel
Don't miss out on the latest news and information.