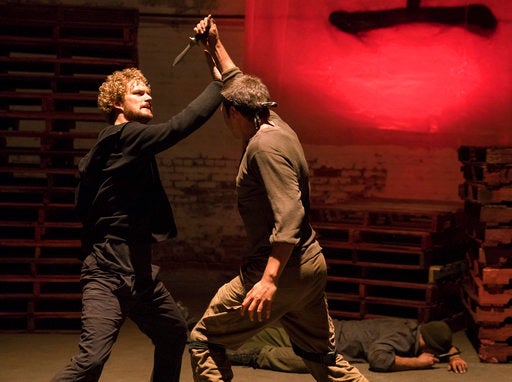 This image released by Netflix shows Finn Jones, left, in a scene from the Netflix original series, “Iron Fist.” The series is and Netflix’s fourth Marvel project, after “Daredevil,” “Jessica Jones” and “Luke Cage.” (Patrick Harbron/Netflix via AP)

NEW YORK— If your web connection seems sluggish while you’re watching “Iron Fist,” don’t blame your internet provider. The problem is the listless pace of this new Netflix series.

But such languor isn’t the only failing of this latest offering from the Marvel factory, judging from critical pans and fan unrest since the 13-episode season was unveiled last week.

Any Marvel project (and this is Netflix’s fourth, following “Daredevil,” ”Jessica Jones” and “Luke Cage”) is breathlessly awaited by fans. “Iron Fist” was no different. But even before anybody saw it, it was already drawing accusations of “whitewashing.”

The series centers on Danny Rand, the scion of a corporate titan who returns to New York 15 years after he and his parents died in a plane crash over the Himalayas.

Well, actually, Danny didn’t die. He was rescued by a mysterious order of monks. And in this intervening period, he trained in martial arts and gained the mystical power of the Iron Fist. Now he returns to New York to reclaim the corporate empire that was hijacked by brother-and-sister baddies (and his childhood friends) Ward and Joy Meachum. He is also, of course, on a quest to “get answers.”

“Iron Fist” stars Finn Jones, who is best known for playing Loras Tyrell on “Game of Thrones.” But casting him as Danny was a missed opportunity, according to disgruntled fans who argue that an Asian-American actor should have been chosen.

Maybe, maybe not. But that would seem to be the least of the ills plaguing “Iron Fist.” For instance, the Polygon website wielded iron fists of its own in declaring that the series’ “problems with delivering exposition, crafting consistent characters, and even basic dialogue writing run right alongside … problems with its portrayal of Asian cultures and Asian-Americans.”

“Not one element of this plodding piece works,” railed Variety, adding that the story line “is about as exciting as a slice of Velveeta cheese left out in the sun too long.”

The New York Times complained about “the dawdling featureless” of the early episodes. And how many viewers could be expected to stick with the series beyond those first installments? Calling it “the first complete misfire of Netflix’s Marvel shows,” the Uproxx website posed the question: “Why would anyone but the most devout, masochistic Marvel completist want to watch?”

The Twitterverse has been no kinder, with one typical post calling it “a great show if you’re looking to sit back, relax and stare at your phone as it plays in the background.” Another tweet likened the series’ fight scenes to “an awkward junior high school dance.”

Even a forgiving Marvel neophyte who samples “Iron Fist” is likely to be put off. The conspicuous lack of action and of visual effects, at least in its early episodes, serves as a stark reminder of how lavish production values, unrelenting action and eye-popping visual effects are taken for granted by today’s audience — and jarring when they’re absent.

Granted, the epic failure of “Iron Fist,” now installed for eternity on the Netflix site, will register as just a blip on the Netflix/Marvel landscape. And since Netflix never discloses audience figures, no one will ever know how many viewers choose to avoid or abandon the series who might have watched a better “Iron Fist” faithfully.

But every potential viewer is advised to note an exchange between two characters in an early episode:

“We need to know more before we can decide how we should proceed.”

Such patience by “Iron Fist” viewers is doomed to go unrewarded.