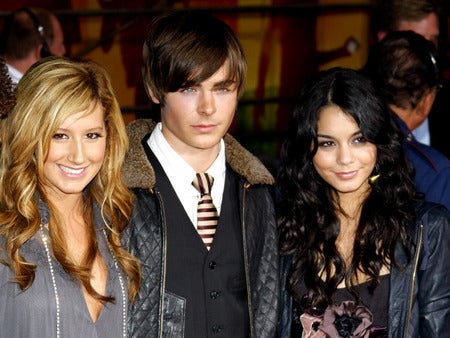 “High School Musical” fans who are still patiently rooting for a likely reunion between Vanessa Hudgens and Zac Efron will be disappointed, now that Hudgens revealed that she was not in speaking terms with her on-screen partner and ex-boyfriend.

In a TV interview with Access Hollywood on Wednesday, the actress was interrogated whether she kept in touch with her former co-Wildcats from the Disney blockbuster. She was also on the show to promote her new NBC sitcom, “Powerless.”

Although Hudgens gushed about texting “High School Musical” co-star Ashley Tisdale before the interview, she admitted that she never spoke with Efron after their split back in 2010. “No, that’s not a thing that happens,” Hudgens said. “I completely lost contact with him.”

@VanessaHudgens mentions how she lost contact with Zac Efron. pic.twitter.com/D512f158R7

A year after her windup with Efron, her boyfriend for almost five years, she moved on with longtime boyfriend and fellow actor Austin Butler.

Last year, the whole “High School Musical” cast reunited for the show’s 10th-anniversary special, but instead of joining the cast, Efron recorded a video message and tweeted his “love” for the show. “I have nothing but love for the High School Musical cast and fans; wish I could’ve joined the fun in person,” he tweeted then.

I have nothing but love for the #HighSchoolMusical cast & fans; wish I could've joined the fun in person. See it tonight @8, Disney Channel.

Read Next
John Mayer reveals new single is about ex Katy Perry
EDITORS' PICK
Over 3 Million worth of prizes to be won at Smart Padala’s SENDali Manalo Promo!
Acer starts the year off strong with the Aspire Vero National Geographic Edition
DOH: 28,471 new COVID-19 cases in PH; active cases now 284,458
WHO urges manufacturers to provide COVID-19 vaccine data
QC gov’t to give free COVID-19 antigen test to residents on January 19
Gear up and get ready to play with Yamaha Mio Gear
MOST READ
Cold-case investigation names surprise suspect in Anne Frank’s betrayal
On Day 2 of implementation, gov’t says workers now exempt from ‘no vax, no ride’ policy
Guevarra to Acosta: Obey rules on unvaccinated
Czech anti-vax singer dies after deliberate infection
Don't miss out on the latest news and information.