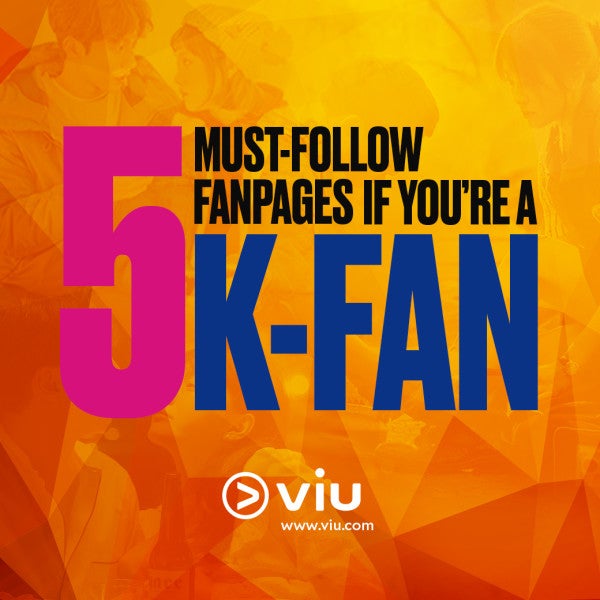 The rise in popularity of various social networking sites in the world, particularly in the Philippines, has given users a lot of platforms to express themselves.

Aside from getting information and chatting with their friends, Filipinos have turned to the social media pages of various celebrities, popular figures and communities to share their thoughts with fellow fans; and with Hallyu or Korean wave reaching the country’s shores, fan pages for everything Korean are now also all over the Internet.

We listed down some of them (plus where you can find them!) and believe us, you are missing a lot if you’re still not following these hilarious K-fanpages: 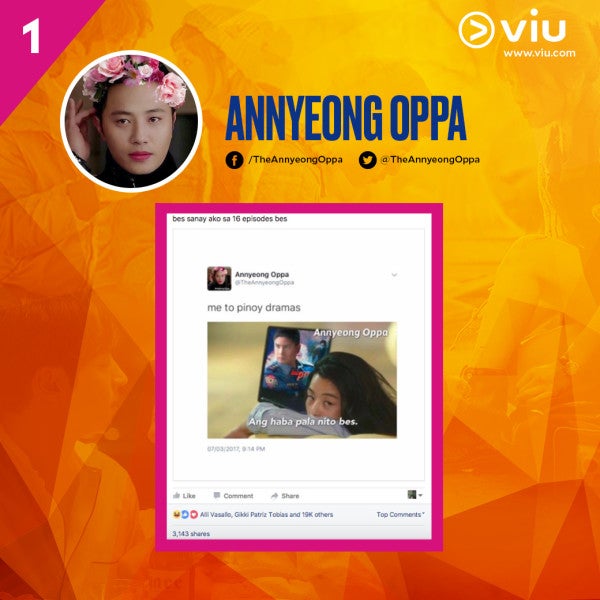 What’s not to love with this one? The Annyeong Oppa Facebook and Twitter pages, managed by long-time blogger Anj De Leon are hubs where you can find all the “fangirl feels.”
If you’re a fan of a Korean drama or Korean idol group, it’s not impossible that you can relate to this online personality. She frequently tweets and posts funny content about the latest K-drama scenes (and actors!). She goes to K-events here in the country and shares the experiences to her followers. She’s one of the reasons why “Do you like Messi?” became a viral question, and if the hashtag #WhenInKDrama passed by your Twitter timeline recently, blame that on this witty page. 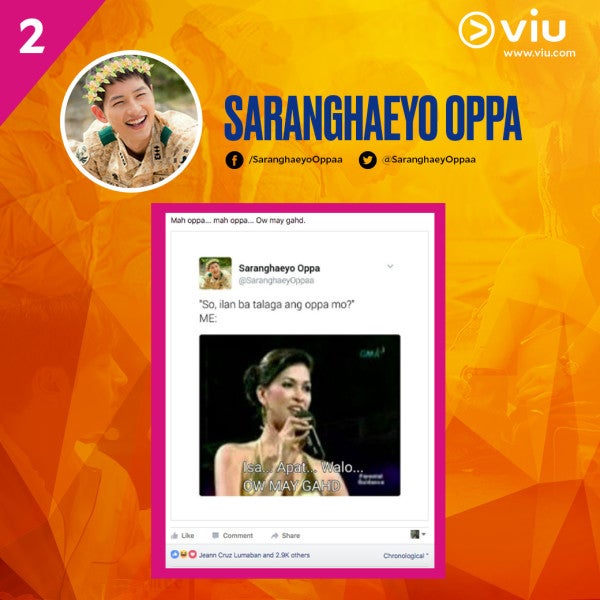 You probably heard of Lee Min-ho already as he was the male lead of the Korean drama “Boys Over Flowers” which was shown here in the country through a local TV station. Aside from Lee Min-ho, there are a lot of Korean actors and boy groups making waves in the country’s K-fans community due to the accessibility of dramas and music shows online and now via mobile apps http://inq.news/viu-fb . “Oppa” is the Korean women’s term for older guys or boyfriends, and these actors’ fans fondly call themselves that.

Saranghaeyo Oppa is the perfect page for those who are supporting a particular actor because it’s very likely that you can find a post or two dedicated for them. Peppered with “hugot” videos and memes, visiting this page will make your day as you can definitely feel all the “feels” as a fan. Bookmark-worthy! 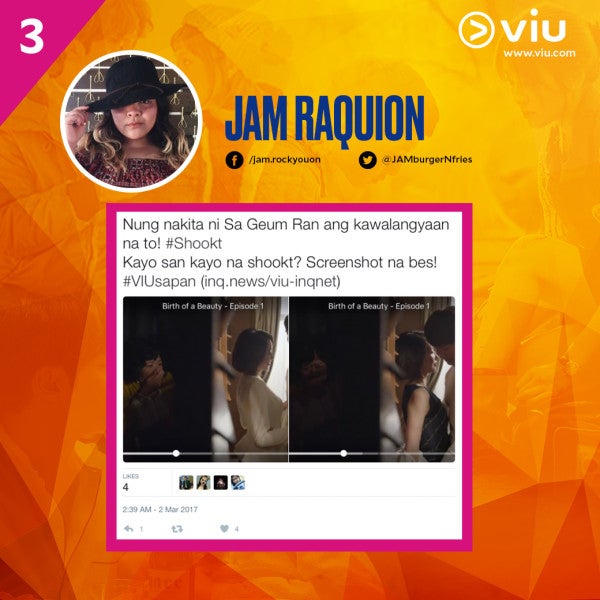 Jam is an online personality known for producing hilarious videos that frequently become viral on Facebook. Her family and friends are also funny as she is, thus, a ton of share-able content on her pages.

Now, aside from continuing her mission to make our day with her funny antics posted online, she has joined the club of K-fans in the country when she started watching dramas.

On her page are commentaries on how she feels about a particular episode or scene, drama recommendations, and more. Relatable and full of wit, her followers are in for a treat whenever they visit her page, because she’s like an online sibling who you’ll love binge-watching with every night. 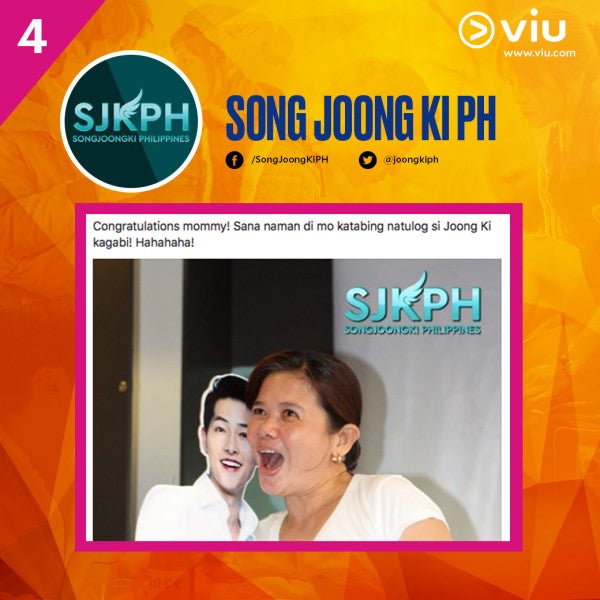 Korean actor Song Joong-ki rose to fame when he starred in the drama “Descendants of the Sun” alongside Full House’s Song Hye-Kyo. The drama broke records in Korea, and a local television station grabbed the chance of bringing it here in the Philippines, which paved the way for Joong-ki’s popularity here as well.

Song Joong-ki Philippines is one of the biggest fan pages of the actor here. If you’re one of the viewers of his dramas, and you find his acting skills and charm worth following, then bookmark the page as it frequently posts updates about the actor’s activities in Korea. With a Filipino touch in their posts, you’ll definitely find fellow fans you can be friends with in the community. 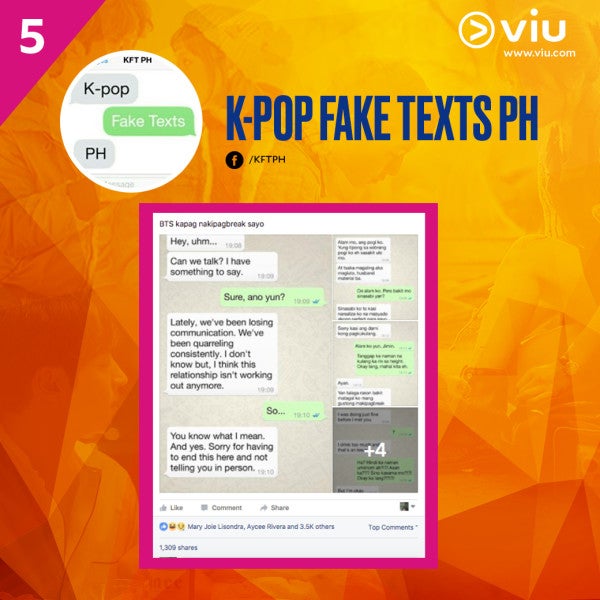 In Korean entertainment culture, a celebrity dating another celebrity is almost taboo. Actors, actresses and idols are very careful whenever they attend public events with other popular figures to avoid getting into “dating scandal.” (Yes, dating is considered a “scandal” to them.) Thus, these interactions are very precious moments, with some fans even considering these as the highlights of certain events.

Another solution? Fan-made fiction, especially this new genre: fake SMS/social chat conversations of celebrities made by the fans. In the Philippines, the most popular page posting this form of creative and innovative fiction is the K-Pop Fake Texts page.

The possibilities are limitless, and so is the fun! On this page, you can witness celebrities and idols from different agencies interact with each other in ways fans have always dreamed of. Imaginary conversations of members within the idol group are must-reads, too!