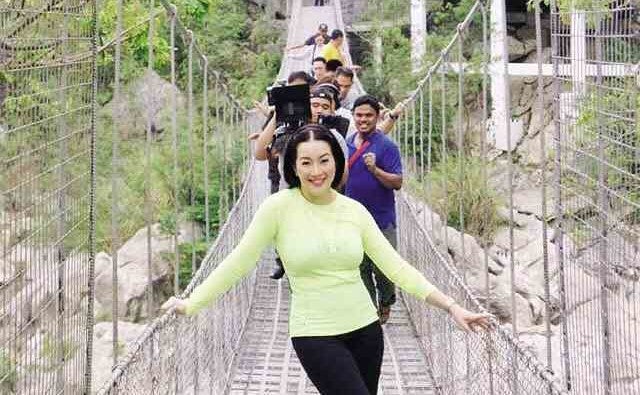 Businesswoman Rhodora Pascual Morales admitted that many people around her had been apprehensive about her decision to produce a TV special for Kris Aquino.

But she had none of that.

“A lot of people were telling me, ‘Why get her? Baka langawin.’ But as an entrepreneur and risk-taker, I disagreed,” she told reporters at a recent press conference for Kris’ one-off, two-hour travelogue “#TripNiKris,” which airs on GMA 7 on April 9 at 10:30 p.m.

“I’m betting my ass on it,” added Morales, who had previously bankrolled live shows for Daniel Padilla and Ryzza Mae Dizon. She had also supported delegates who competed in past editions of the World Championships of the Performing Arts.

And despite all the intrigues that often hound Kris, Morales believes that the television host—who currently has no existing contract with any network—is still a “credible” show biz personality.

“My friends and I have always been fans of Kris. Sometimes, I would arrive late for my morning meetings, because I used to watch her show (the defunct “Kris TV”),” Morales related, laughing. “You can’t force her to do something she doesn’t like.”

Creating a program for Kris has always been “a dream” for Morales. But it wasn’t until early this year that she finally got the opportunity. “We have known each other for a while, but we usually just see each other at parties. In late January, we bumped into each other at a restaurant. That’s where it all began,” related Morales, stressing that she didn’t have issues regarding Kris’ talent fee.

“She actually said that she was willing to do it for free, but of course we couldn’t do that, because we took a lot of her time,” she said.

According to Morales, who’s involved in electrical, pharmaceutical and entertainment businesses, “#TripNiKris” aims to highlight the scenic destinations of Nueva Ecija, her home province.

Morales clarified that her deal with Kris was for only one episode. But should Kris be able to free up her busy schedule in the future, Morales said she hoped to continue with “#TripNiKris” and feature other local spots in the Philippines. And who knows, she added, she might even produce a talk show for Kris.