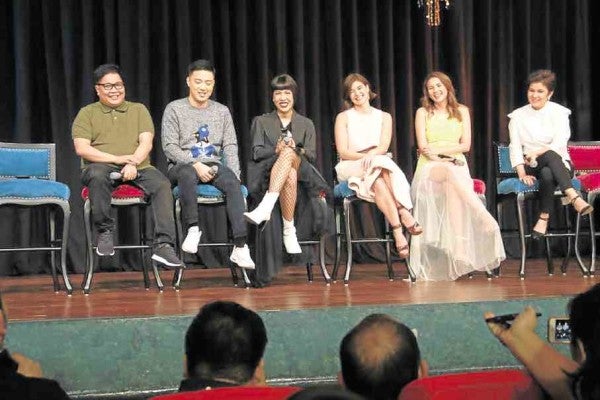 The program’s talent search segment, which gives aspiring singers from all over the country a chance to pursue their dreams, ends today via a show dubbed “Ang Huling Tapatan,” at the Resorts World Manila in Pasay City.

The winner will bring home P2 million in cash, a house and lot, a music instrument package, and a one-year talent management contract from ABS-CBN.

Cohost Anne Curtis agreed with Vice, saying: “I do have my favorites. I felt disappointed when they were eliminated, but we have to trust the judges’ choices. This is not at all different from the audience’s preferences. Their choices aren’t always the same as the jurors’. It’s really a hit-or-miss thing,” she said at a press conference held inside the ABS-CBN Compound in Quezon City on Tuesday.

Cohost Amy Perez said: “I don’t contest what they say because I don’t have the credentials [of a recording artist like them]. I may have been linked to a singer, but I am not one (laughs). Sometimes, I ask my niece Karylle, ‘Was that singer really out of tune?’”

Karylle explained: “Different jurors have different tastes. That’s why there are always five people sitting there each day. The day’s winner will depend on the combination of hurados (judges) and on the performances of that day.”

Karylle said there were days when picking the winner was difficult. “We disagree with each other sometimes, especially when there are more than one good performer at a given day, but in the end, it boils down to taste—our favorite song or our preference in singing style.”
Karylle said she would look for that “great” singer, “who would give a performance so touching that it would make me feel emotional, or would give me goosebumps. I want to see a performance so unforgettable that it will make me talk about it again and again.”

Cohost Jugs Jugueta, also the frontman of the band Itchyworms, said: “It’s my task, along with Teddy (Corpuz, Rocksteddy vocalist), to interview the contestants after their performances, so it’s difficult to be emotionally attached to them. We give our comments and pointers after they perform.”

“Tawag ng Tanghalan” was first aired on ABS-CBN from 1953 to 1972. It went on air again from 1987 to 1988. Among the biggest winners of the contest were the late Pepe Pimentel, Nora Aunor and Bobot. The 2017 grand champion will be chosen based on the sum of the jurors’ scores and the result of the audience’s text votes.