I could still break a heart, or two | Inquirer Entertainment

I could still break a heart, or two 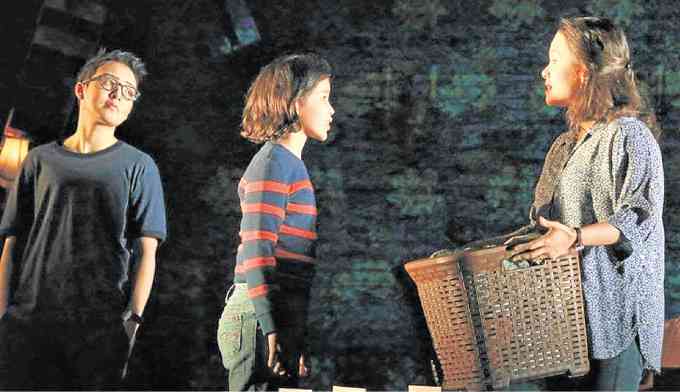 From left: Cris Villonco, Katie Bradshaw and the author in “Fun Home”

In as much as this is a line delivered in song by one of “Fun Home’s” main characters, Bruce Bechdel (played by Eric Kunze in the Manila production), it could very well define the experience of Jeanine Tesori and Lisa Kron’s heartbreaking Tony-winning musical. The Bechdel family of Maple Avenue is back at Carlos P. Romulo Auditorium at RCBC Plaza starting tomorrow night.

We foresaw that bringing everyone back to the show would be just like riding a bike: Once you learn, you don’t forget. It was not surprising that this show dug its way so deep into our hearts that there was really no letting go.

The process of remounting a musical is somewhat easier than starting from scratch. However, one cool thing we’ve been able to do was to take a second look at things.

A lot of living has happened since November 2016, so bringing that into the rehearsal room shed some new light on the material and our interpretation of it.

But, first things first. We had to start anew from wherever we left off: The whole cast—Eric, Cris Villonco, Mikkie Bradshaw-Volante, Yanah Laurel, Laurence Mossman, Katie Bradshaw, Andee Achacoso, Daniel Drilon, Teddy Velasco, Noel Comia, Albert Silos and yours truly—brought our scripts out.

We read and sang through the show while keeping our eyes on the text, in case we missed things. And, in fact, some of us did! For the first run, there were lines I was saying wrong. For this second run, I have the chance to say them right.

At Mirror Studios in Makati, our stage crew led by Ed Murillo reassembled our rehearsal set, along with a few of the props we would be using in performance. Many of the actual furniture would be waiting for us at the theater.

The run-throughs went quite smoothly. However, we moved to another space at M Studios, which meant another adjustment period.

It also wasn’t helpful that a couple of us—including me—were under the weather fighting the common cold. We did power through despite it all, and our vocal coach, Manman Angsico, was able to do a thorough cleanup of bits that we had forgotten. It’s always a great thing when that happens, as it brings back our focus on telling this story.

And the story has not lost any of its punch and power. The actors in this show have been tasked with handling a sensitive, complicated, moving, jolting, powerful story—a story of secrets, acceptance of self and others, and ultimately, family.

At our first run, none of us had any idea how “Fun Home” would be received by our audiences in Manila. Sure, it was a certified Broadway hit, and has been getting great notices on its national tour. But how would this show based on the best-selling memoir of a lesbian cartoonist be seen in our conservative country?

It turns out that many folks from home had more in common with Alison Bechdel, her father Bruce, and her mother Helen than any of us thought.

After one performance, I was told about a mother and son who left a little hill of tissues by their seats.

The mother joked that one box wasn’t enough for our 100-minute show. Well, we found out that she, throughout her marriage, had been abused by her husband verbally and physically.

Following the final lines of “Days and Days,” the son then turned to his mother and said, “Mom, you don’t have to give away your days anymore.” Many of us teared up when we heard that.

This is why we do theater. We get to empathize with other human beings by either walking in their shoes, or by watching other people do so. We find out how someone seemingly different from us lives, then discover that we’re actually more alike than we care to admit.

We’ll have only 12 more times to experience this beautiful musical. So, allow me to invite you to come to our “Fun Home.”

And don’t forget to bring tissue—you may need it.