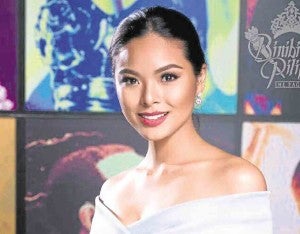 While not being categorical in her statement, Miss Philippines Universe 2016 Maxine Medina said hinted at venturing into the show-biz world.

“Stay tuned. Abangan niyo kung ano ang magiging pasabog ni Maxine Medina (Stay tuned. Watch out for Maxine Medina’s explosive announcement) in the next few months,” she said when she was interviewed at the Converse Philippines Face Off OOTD fashion event where she modeled a Rhett Eala piece.

Medina said she was open to explore anything including working with “veteran” actors.

Her model boyfriend has also debuted in show biz via a GMA drama series.

Meanwhile, the 5’6″-tall beauty clarified about a spreading rumor that she had ditched a guesting gig.

“Oh yeah I did know about that. I was sick. Super wala akong (I really had no) voice,” she explained.

She said she immediately advised the event organizers about her condition and that she wouldn’t be able to show up.

(Actually it was 5 a.m. [and I was] on full effort, but I really had no voice. I lost my voice the same day of the event.)

(They picked me up. I said, ‘Sorry I really have no voice.’ And of course it would be be shameful to be guesting when I had no voice.)

All was well in the end as Medina was able to iron out the matter with the organizer.  /ra