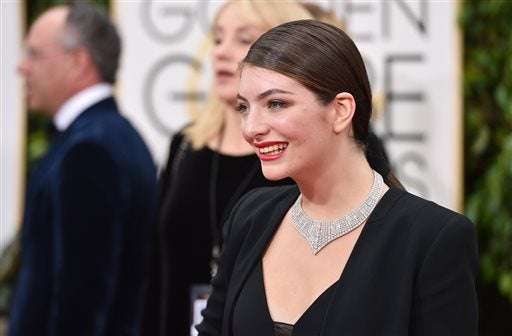 NEW YORK—In one of the most anticipated returns in pop music, Lorde unveiled a song Thursday in which the onetime teenage star takes a new dance sound and adult look.

The now 20-year-old New Zealander announced a second album called “Melodrama,” her follow-up to 2013’s “Pure Heroine” which won her phenomenal success while still a teenager.

Lorde released the album’s first single, “Green Light,” which is strikingly livelier than her minimalist breakthrough hit, the Grammy-winning “Royals.”

“Green Light” starts off with a sullen piano as Lorde, explaining a breakup, sings: “I do my makeup in somebody else’s car / We order different drinks at the same bars.”

The track quickly heads in a dance direction, with the piano backed up by a driving bass line, a backup chorus and a subtle electronica beat.

“Oh, I wish I could get my things and just let go / I’m waiting for it, that green light, I want it,” she sings.

In an accompanying video, Lorde shows up at a nightclub, singing to herself in the mirror of a bathroom where a pianist performs in the corner, and hailing a car as she eventually hops on its roof to dance.

Lorde wrote the song and upcoming album with Jack Antonoff, the guitarist of fun. and the frontman of Bleachers.

Lorde said she spent the past 18 months with Antonoff working on “Melodrama,” which will come out in the coming months. She is scheduled to play a series of upcoming festivals including Coachella.

The artist born as Ella Yelich-O’Connor has been writing songs since age 13 but has managed to avoid the tabloid headline-grabbing lifestyle that is notorious among child stars.

She said that she deliberately cloistered herself to concentrate on the successor to “Pure Heroine,” which sold more than three million copies in the United States.

“For me, it was kind of about processing what I wanted to say in it,” Lorde said of “Melodrama” in an interview on Apple Music’s Beats 1 radio.

“I knew it just couldn’t be any old thing. It had to be really special and really singular and it couldn’t sound the same as the old stuff.”

While “Royals” mocked the quest for material wealth, Lorde acknowledged that “Green Light” came from a more internal perspective — it centered on her life’s first major breakup.

“The song is about those moments immediately after your life changes and about all the silly little things that you gravitate towards,” she said.

Lorde had teased clues about the song in recent days back in New Zealand, including shining green light on the Auckland Town Hall concert venue.

She told Beats 1 interviewer Zane Lowe, another New Zealander prominent in the music business, that she still felt at home there despite recording “Melodrama” in New York.

“It’s crazy when you’re so young to be spending all your time in LA or New York,” Lorde said.

Lorde said she was still processing her “first proper year of adulthood” — and that her experience, with both its “glory and disgusting moments,” dominated the album’s themes.