What it was like at Oscars backstage, after-party amid envelope mix-up | Inquirer Entertainment

What it was like at Oscars backstage, after-party amid envelope mix-up

LOS ANGELES—Backstage at the Oscars last Sunday night, as the best picture was about to be announced, I was almost done writing my story on the ceremony when the incredible ending twist happened.

The assembled media from around the world collectively gasped when Warren Beatty admitted that the wrong envelope was read. “La La Land,” whose producers were already saying their thank yous onstage, was not the best picture winner; “Moonlight” was. 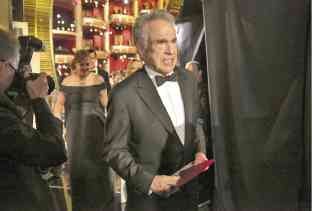 When best actress winner Emma Stone strode into the room, the “La La Land” star was peppered with questions about the envelope mix-up. She was remarkably gracious.

“I f***ing love ‘Moonlight,’” Emma began. “Of course, it was an amazing thing to hear ‘La La Land’ (as the winner). We all would have loved to win best picture, but we are so excited for ‘Moonlight.’ I think it’s one of the best films of all time.”

“I was also holding my best actress in a leading role card that entire time,” the actress stressed, referring to the stories that the best picture presenters (Warren and Faye Dunaway) had the best actress winner card. “So I’m not sure what happened.”

It turns out that as per their practice for many years, PricewaterhouseCoopers, the accounting firm that tallies the Oscar votes, had two employees, Brian Cullinan and Martha Ruiz, one on each side of the stage, with a set each of the winner envelopes. Brian was reportedly busy tweeting, taking photos and congratulating the winners instead of paying attention to the envelopes. He handed the wrong card to Warren Beatty.

“Everyone’s still in a state of confusion,” Emma described the atmosphere onstage and off, just minutes after the gaffe.

On “La La Land” being a best picture winner for at least about three minutes before the error was announced, Emma answered, “We made history tonight. I don’t even know what to say. I’m still on such a buzzy train backstage that I feel like I’m already on another planet.” 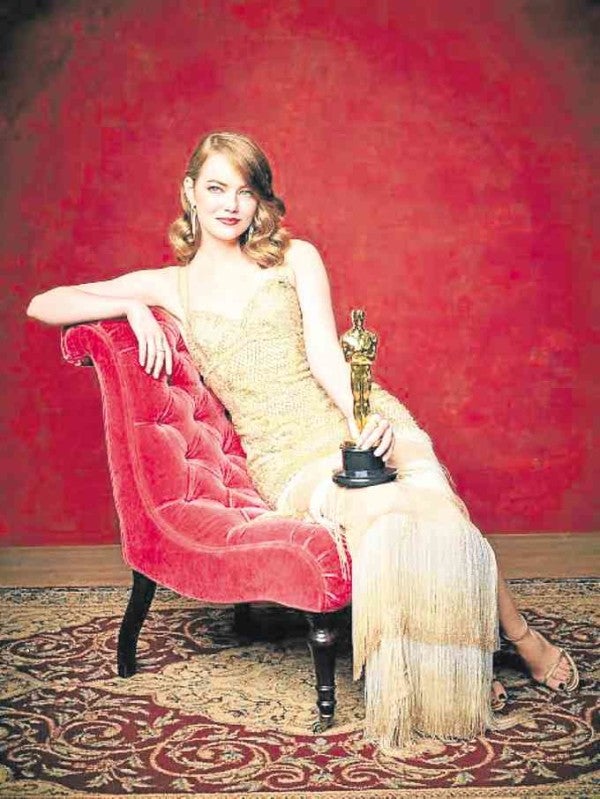 Barry shared with us how he reacted, from losing the night’s plum prize to winning it, all in a few minutes: “All the movies that were nominated were worthy, so I accepted the results. I applauded like everyone else (when ‘La La Land’ was announced as the best picture winner). I noticed the commotion that was happening. I thought something strange had occurred.

“I was speechless. That was awkward because I’ve watched the Academy Awards. I’ve never seen that happen before. So it made a very special feeling even more special, but not in the way I expected.”

On what he thinks he will remember most from these life-changing minutes in his life, Barry replied, “I don’t think my life could be changed any more dramatically than what happened in the last 20 or 30 minutes.”

At that early stage, Barry said that he did not get an explanation about the snafu. “But I will say I saw two cards. I wanted to see the card. Warren refused to show the card to anybody before he showed it to me. So he did. He came upstairs (to the Governors Ball). He walked over to me … He showed it to me, and I felt better about what had happened.”

Barry then made a plea to journalists in front of him: “I will say to all you people—please write this down. The folks from ‘La La Land’ were so gracious. I can’t imagine being in their position and having to do that. We spent a lot of time together over the last six months (awards season campaign). I wasn’t speechless because we won. I was speechless because it was so gracious of them to do that.” 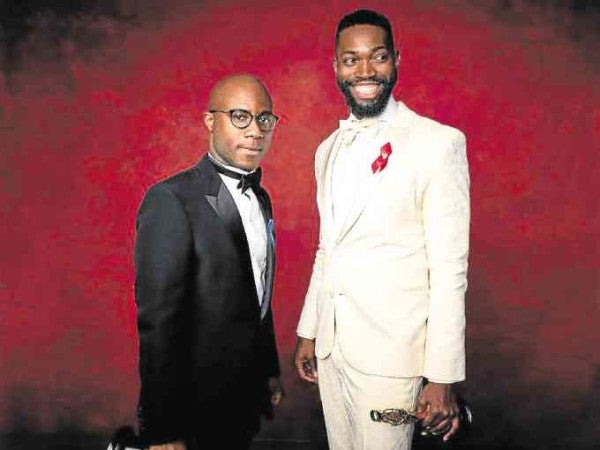 The filmmaker remarked that had he not been caught off-guard by the quick turn of events, he would have thanked more profusely the indie distributor that championed his film about a gay black man coming of age in Miami.

“I absolutely wanted to thank A24 a thousand times, because the budget we were offered was much smaller,” Barry disclosed. “Without us asking, they increased that budget because they believed in the project.”

Later, at Lionsgate’s Oscar after-party for “La La Land” at the Soho House in West Hollywood, the atmosphere was cool and relaxed. After all, the team behind the acclaimed paean to LA took home the most statuettes of the man in gold—six. Guests, including best director nominee Mel Gibson (for “Hacksaw Ridge”), Tobey Maguire, Fil-Am Darren Criss and Vince Vaughn, congratulated the musical’s newly minted Academy victors.

Damien Chazelle, who at 32 years old made Academy history as the youngest best director winner ever, held court in one corner, calm and serene, as usual. 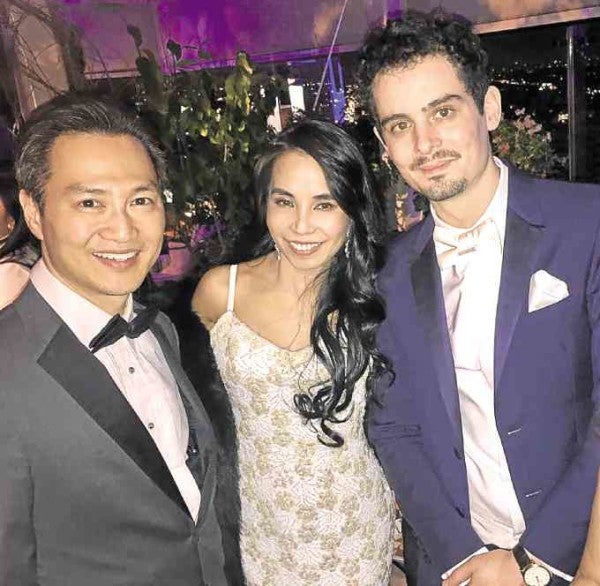 The boyish, curly haired talent, who skipped the backstage interview, told me that he would chill for a bit. Then, he will begin “First Man,” his next project which reunites him with his “La La Land” star Ryan Gosling, who will portray astronaut Neil Armstrong.

Justin Hurwitz, who won best score and best original song (“City of Stars”), with Justin Paul and Benj Pasek, were celebrating their first Oscars with family and friends. 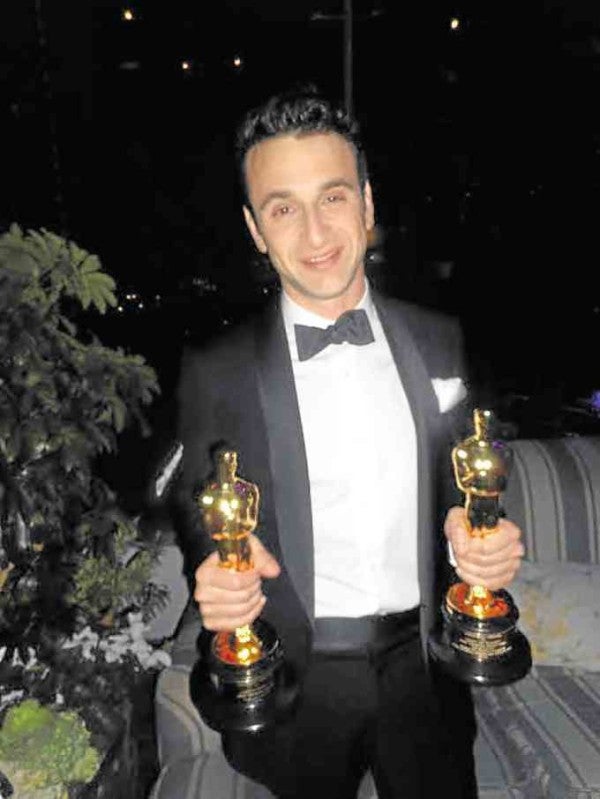 It was an extra special time for Paul and Pasek, and Hurwitz and Chazelle—two sets of buddies who have known each other since their freshman days in college—at the University of Michigan and Harvard, respectively.

Earlier, at the backstage room, Benj, who wrote the Broadway hit “Dear Evan Hansen” with Paul, was grateful for their individual wins and also cordial about their film’s best picture award loss to “Moonlight”: “We feel lucky to be here. We’re guys who love to write music. We got the opportunity to do that and, now, we’re holding the Oscars. So, we’re having a fantastic night.”

Paul, for his part, said about the flubbed best picture announcement: “It was obviously a surprising moment, but we’re thrilled for ‘Moonlight.’ It’s a fantastic film, and one that we’re all fans of.”