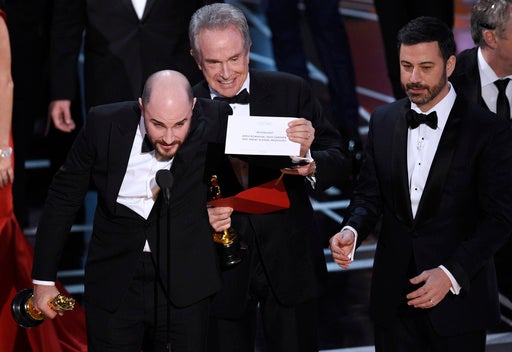 Jordan Horowitz, producer of “La La Land,” shows the envelope revealing “Moonlight” as the true winner of best picture at the Oscars on Sunday, Feb. 26, 2017, at the Dolby Theatre in Los Angeles. Presenter Warren Beatty and host Jimmy Kimmel look on from right. (Photo by Chris Pizzello/Invision/AP)

The viral and unintentional gaffe at last night’s Academy Awards rings a bell to many pageant fans and, especially, the Miss Universe body.

Filmmaker Warren Beatty called up the crew of “La La Land” for winning the said category but corrected his live mishap when he noticed he opened the wrong envelope. On stage, “La La Land” executive producer Jordan Horowitz handled the issue with grace and bestowed the trophy to the real Best Picture winner, “Moonlight.”

While the internet audience was still hanging their jaws with the faux pas, Miss Universe’s Twitter account offered the Oscars people a pat on the back. “Have your people call our people – we know what to do,” the organization tweeted on Monday.

Have your people call our people – we know what to do. #Oscars #MissUniverse

In a tweet on the same day, Wurtzbach shared a snippet of her previous hair commercial where she said, “If it can happen to me, It can happen to anybody.”

Harvey himself even reached out to Beatty following the gaffe. “Call me Warren Beatty, I can get you through this!” he tweeted.

Good morning everybody! Went to sleep early last night. So… what I miss? #Oscars

Call me Warren Beatty. I can help you get through this! #Oscars

During the 64th Miss Universe edition, Steve Harvey wrongfully announced Miss Colombia Ariadna Gutierrez as the victor of the beauty competition, but returned on stage to crown the German-Filipino beauty queen as the Miss Universe heir.  Gianna Francesca Catolico /ra

A snafu for the ages caps Oscars night