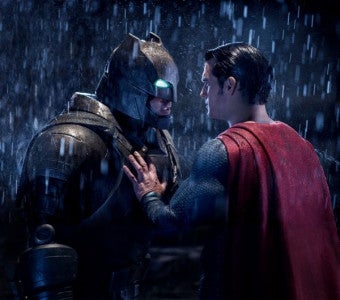 The rivals won four “Razzies” each for their poor acting, writing and directing, although the anti-Clinton documentary walked away with the spray-painted trophy for “worst picture.”

“It all came down to two decidedly different examples of cinematic sludge: the $250 million comic book oop-us ‘Batman v Superman’ and the faux right wing ‘documentary’ ‘Hillary’s America: The Secret History of the Democratic Party,'” a statement from the Razzies read.

Dinesh D’Souza picked up the prestigious double of worst actor for his narration and worst director on “Hillary’s America” which has an average rating of 1.7 out of 10 on online reviews aggregator Rotten Tomatoes.

The site’s critical consensus reads that the movie has the conservative commentator “once again preaching to the right-wing choir—albeit less effectively than ever.”

Rebekah Turner, unnamed by the awards, won worst actress for her turn as the losing Democratic presidential candidate, while worst supporting actress went to Kristen Wiig for her efforts in the panned “Zoolander No.2”.

“Batman” took the Razzie for worst supporting actor Jesse Eisenberg, who caused many a critic’s jaw to drop as he chewed the scenery as Lexx Luthor.

The Razzies were created in 1980 as an antidote to Hollywood’s star-studded, back-slapping annual awards season, which climaxes Sunday with the 89th Academy Awards.

Nominees rarely attend the Razzies, usually held in small venues somewhere in and around Los Angeles, and there was no ceremony at all this year.

Sandra Bullock turned up in 2010 to accept worst actress for “All About Steve”, a day before winning her best actress Oscar for “The Blind Side”.

Eight of the nine Razzie categories are chosen by the 800 or so members of the Golden Raspberry Award Foundation, who earn voting rights by paying a $40 membership fee, with a $25 annual renewal.

Worst screen combo is determined by ratings from more than 80,000 users of the Rotten Tomatoes movie review website.

While they were neck-and-neck for the award, there was some distance between this year’s two big Razzies winners at the box office.

The annual Razzie Redeemer Award went to actor-director Mel Gibson, who has had glowing reviews for his war movie “Hacksaw Ridge”, 10 years after he was ostracized following a drunken antisemitic rant. JB