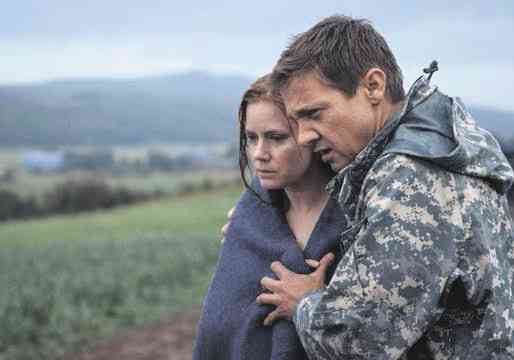 Amy Adams plays a linguist tasked with deciphering the language of mysterious beings that suddenly appear on Earth in “Arrival,” a simple but intelligent science-fiction drama by Denis Villeneuve (“Sicario”).

When a dozen large objects manifest on different spots across the globe, a US colonel (Forest Whitaker) recruits seasoned translator  Louise Banks (Adams) and the similarly inquisitive theoretical physicist, Ian Donnelly (Jeremy Renner), to help communicate with aliens within the hovering structures.

Initially stunned by the close encounter, Louise soon devises ways to communicate with the otherworldly creatures, and is supported by Ian, who follows her lead.

Their progress, however, isn’t mirrored in other parts of the world, where other alien ships are being met with increasing fear and hostility.

Based on a short story, “The Story of Your Life” by Ted Chiang, the film benefits from Villeneuve’s tight direction, whose “Sicario” previously focused on a competent and vulnerable female protagonist.

With a similarly serious tone, “Arrival” shows nuances that balance out the bigger, more obvious scenarios, this time in a nonlinear sequence. 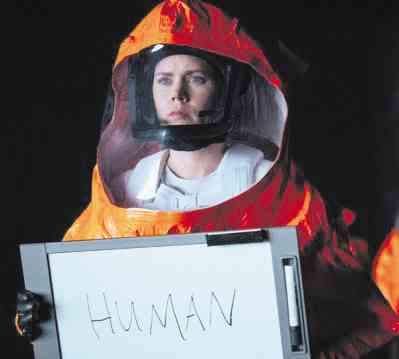 Adams plays a linguist in “Arrival.”

Adams is subtle but powerful; she communicates her character’s motivations well, whether as a puzzle-solver or a desperate, grieving mother.

The aliens’ intentions, meanwhile, are a good mystery, and while those non-humanoid entities may look  goofy, they’re mostly believable, interacting with  a unique and fascinating “alphabet.”

Themes of destiny and universality, accentuated by more fantastical story elements such as precognition and time travel, swirl into a straightforward but rich sci-fi tapestry. Moreover, the cast and crew pull it off, profoundly communicating the tale about establishing connections.