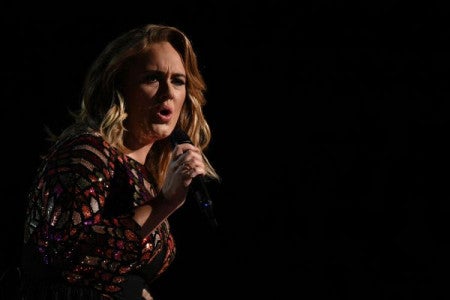 Adele will lend her vocals in the tribute-charity album. Image: AFP Relaxnews

To mark a decade since her debut album “The Story” took fans and critics by storm, American folk singer Brandi Carlile has invited a host of her musical heroes into the studio to re-make the record for charity.

“Cover Stories: Brandi Carlile Celebrates 10 Years of The Story” will go on sale on May 5 and when it does, it will feature Adele’s interpretation of “Hiding My Heart”, Dolly Parton’s performance of “The Story”, Pearl Jam’s take on “Again Today” and Kris Kristofferson singing “Turpentine”.

In the foreword to the new recording, former United States president Barack Obama, writes: “As an artist, Brandi Carlile is using her talent on behalf of the most vulnerable among us, children living in areas of conflict. She reminds us that, together, we can build for our children a more just, peaceful world.”

All proceeds from the album will be going to the United Kingdom-based charity War Child. For over two decades, it has been committed to helping children trapped by conflict around the world.

“Since becoming a mother, the reality of a child’s beautiful life being torn apart by war felt like too big of a problem for me,” said Carlile of her motivation for the album. “So I asked my heroes and friends to help me launch a rock at the giant that is our refugee crisis and help in the only way we know how, through the power of music.” JB