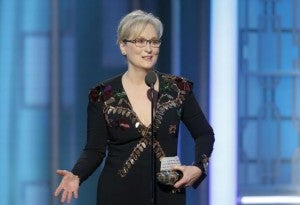 This photo, taken Jan. 8, 2017, which was released by NBC, shows Meryl Streep accepting the Cecil B. DeMille Award at the 74th Annual Golden Globe Awards in Beverly Hills, California. Streep gave an impassioned speech at the Golden Globes criticizing President-elect Donald Trump for mocking a disabled reporter and calling for the defense of a free press. (Photo by PAUL DRINKWATER/NBC via AP)

BEVERLY HILLS, California — Meryl Streep ushered politics into Hollywood’s awards season when she used her Golden Globes acceptance speech to condemn President Donald Trump for what she called his “instinct to humiliate.”

Stars were even more outspoken at the Screen Actors Guild Awards, held just days after Trump’s travel ban caused havoc at airports across the country. Even last week’s performance-heavy Grammy Awards had a political edge when members of A Tribe Called Quest raised their fists and Q-Tip repeated a call to “Resist.”

The Feb. 26 Academy Awards are the final stop of the industry’s annual two months of self-adulation, and while show producers aren’t planning any political content, the night’s winners might be.

As much as first-time Oscar telecast producers Michael De Luca and Jennifer Todd may want their show to focus on the magic of the movies, they say they support any message spoken from the heart, even if it means turning the Oscar podium into a political pulpit.

“The show has to stand behind the free exchange of ideas,” De Luca said in a recent interview. “I do believe a little bit in the famous Sam Goldwyn quote about movies: ‘If you want to send a message, call Western Union.’ And there’s a school of thought that says people are tuning in to celebrate the storytelling that’s moved them, and should we limit what we say to a celebration of that?”

But Oscar-caliber artists “are the kind of people that do get moved by the environment and the world they live in,” De Luca said, and they may want to use their moment on stage “to share those feelings the same way you shared the story that you’re being nominated for, and we want to honor that, too.”

Given the tone set by celebrities at other awards shows this season — and on social media since the election — some anti-Trump rhetoric at the Oscars wouldn’t be surprising. The show already has a political element: The Iranian director and star of foreign language film nominee “The Salesman” have said they will not attend the ceremony in protest of Trump’s travel ban.

“Each and every one of us knows that there are some empty chairs in this room, which has made academy artists activists,” she said. “There is a struggle globally today over artistic freedom that feels more urgent than at any time since the 1950s.”

Oscar host Jimmy Kimmel hasn’t given much hint of his approach for the show. Winners are free to use their allotted 45 seconds of speaking time as they please.

“I hope that the Oscar speeches, whatever they are, are just well said,” co-producer Todd said. “I loved when Patricia Arquette talked about fair pay (when accepting the supporting actress Oscar in 2015). She did a beautiful job and she spoke from her heart. So I just think that as long as you’re going to do it, do it well.”

“Those feelings can create moments for the telecast that are really memorable,” he said. “And spontaneity is our friend. Anything that’s not scripted, that’s natural and from the heart, is a good thing for the telecast.”

And if viewers who disagree with the politics decide to tune out?

“We’re of a mind of: Let people be the people they are and not worry about the public reaction,” De Luca said.

Oscar nominees and guests say they expect politics to have a presence at the 89th Academy Awards.

“I suppose each Oscar show represents its time on some level,” said Viggo Mortensen, nominated for lead actor for “Captain Fantastic.” “I think the Trump White House so far is not about being, let’s say, completely honest and above board. It’s not really about intellectual curiosity. It’s not about listening to people who think differently. It’s about, to some degree, shutting people up who you don’t like or who don’t agree with you, and I think the Oscars will probably be the opposite of that.” –Sandy Cohen