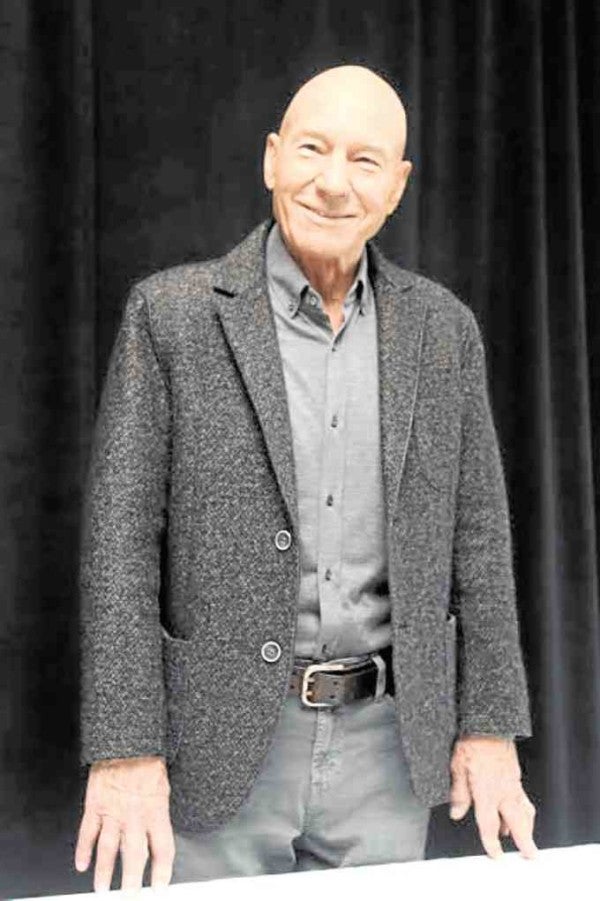 LOS ANGELES—“My beauty routine?” Patrick Stewart repeated aloud a question thrown at him in jest, his eyes full of mirth. “Well, I’ve never been asked that before.”

“Right now, all I have to do is to look good for you,” added Patrick with a laugh. “So that’s the objective of my beauty hair regimen.”

The highly respected thespian, who had a long run with the Royal Shakespeare Company and was knighted by Queen Elizabeth II in 2010, plays Charles Xavier/Professor X for the last time in James Mangold’s “Logan.” Hugh Jackman, also in his last film as Wolverine, cares for the seriously ill Professor X in a hideout.

But when a beleaguered young mutant (Dafne Keen, only 11, a terrific find as Laura Kinney/X-23) arrives, the weary Logan/Wolverine and the ailing professor are forced to spring into action.

As a nonagenarian in the film, set in the near future, Patrick has a full head of hair—thus, the playful question about his own maintenance of his shaved head.

Preferring to stand throughout the interview, Patrick—fit and trim at 76—looked every inch the fine stage actor that he is. It was like watching him deliver a witty, riveting one-man show in a theater. Except that we were in a room on the 10th floor of Crosby Street Hotel in New York’s SoHo.

Patrick’s anecdotes, especially about meeting Sting and being clueless as to who he is, are priceless.

In the movie, Charles Xavier has hair. Do you personally prefer to have hair or no hair? I created my own backstory for Charles’ appearance in the film. He is very old.  He’s 90-plus and his brain is no longer the brain of the man we have seen over the last 16, 17 years.  It is one of the strong characteristics of the “X-Men” movies.

I am not speaking about Patrick Stewart now but about Charles Xavier—that this man’s intelligence was of the highest, finest and subtlest quality. He was filled with compassion and understanding. He was passionate about the well-being not only of mutant society but all of humanity. That was then.

What is happening inside his head has changed significantly who he is, his personality, outlook and behavior. It seemed to us that it would be an intriguing idea to say that it also had an impact on his appearance. Oh my, the head is changing so much that there is hair growing out of it. It’s not the Charles Xavier in the past who used a trimmer to shave his head.

My brilliant makeup artist literally applied that hair and this has never happened to me before—hair by hair which is why it looks so authentic and convincing. I had a week of stubble on my chin, too. I was very happy with the look.

I also lost 20 pounds in weight. I did it very slowly over a space of four months while shooting the second season of “Blunt Talk.” Because I wanted to do it without makeup to get as close as possible to the appearance of a 90-year-old man who is very ill.

In the film’s dinner scene, your character says it is one of the best nights he’s had in a long time. What is a great night for you? Here is the self-obsession of the actor. I’ve just finished six months on stage (“No Man’s Land”) with Sir Ian McKellen and two other brilliant actors. Those nights when we know—and we can’t explain why we have given a good performance—give me the deepest and most profound satisfaction. Then I go home to my wife (Sunny Ozell).

A theme that has always made the “X-Men” relatable is that mutants are a metaphor for differences in the world. The story of the government figuring out a way to get rid of the mutants couldn’t be timelier. Fear of the other is what lies behind all of this, along with selfishness. It is only by trusting ourselves and in the essential goodness in most of humanity that we can banish that fear of the different.

You’re right, the mutants in “X-Men” have represented that other all along. It has been, for me, one of the most important aspects of this franchise—every single movie has been significantly about something which is contemporary.

What part does music play in your life—maybe it’s something that inspires you in your acting? I grew up in quite a poor home. We didn’t have a gramophone. We didn’t, of course, have CD players. All we had was an old battery-driven radio.

It was through my exposure to what was then called the Third Programme or now BBC Radio 3, which played classical music and also, from time to time, had complete radio productions of Shakespeare. That was where I heard my first Shakespeare. I didn’t understand what I was listening to—neither the Shakespeare nor the Beethoven—but I liked it. It was comforting and interesting.

But I’ll tell you two anecdotes to do with me and music. I worked in Liverpool for a year at the Playhouse in the repertory theater. I lived in Birkenhead, which meant I crossed the Mersey on a ferry twice a day, morning and after the show at night. The shortcut to the theater was up an alleyway. I always passed by a sign hanging outside a door which said The Cavern.

This was 1963. I didn’t know what The Cavern was (laughs).  I didn’t know that that was where The Beatles first became a phenomenon.

Let’s leap forward to 1980 and I’m in Mexico at Churubusco Studios, filming David Lynch’s wonderful movie, “Dune.” Everyone gets excited one day because we hear that somebody called Sting is going to be joining the cast (laughs). I said, “Sting what?” They said, “That’s his name.”

He’s a very nice, very pleasant, good-looking chap. One day, we’re sitting side by side. I said to him, “So you’re a musician.” He said, “Oh, yeah.” I said, “That’s great. What do you play?” He said, “Bass.” I said, “I’ve always wanted to ask someone like you, why would you choose such a huge instrument (laughs)?”

I am told that Sting himself tells this story (laughs).

However, things changed nearly 10 years ago when I met my wife who is a musician and a wonderful singer. She is now giving me my serious musical education (laughs).

In the movie, Xavier has a message to the young “X-Men.” What message would you like to leave  the next generation?

If I were to leave any message behind, it would be that I hope that our civilizations are able to erase selfishness and self-interest from their agenda. Although it might provide a few people with what they desire, it leaves many millions of people in the dark, in the cold, hungry and outcast. That is a severe indictment on our civilizations presently.

In playing a 90-plus-year-old, did you reflect about your own mortality? Did filming this become a poignant experience?

Yes, very much. It became very poignant for me. More distressing for my wife who is significantly younger than me (she’s 38). When we saw the film together a few weeks ago, she was so distressed by the sight of me in that first scene in the tank … how I looked, behaved, how I was.

Mortality is on my mind every day … In fact, after the last year that has gone, I have promised myself I will never have another year like that because the workload was just too intense.