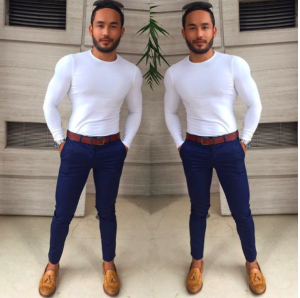 Filipino comedian Sinon Loresca has been invited to appear on the Emmy Award-winning US television show “The Doctors” after his Miss Universe catwalk became an internet sensation.

Known as Rogelia in GMA 7’s “Eat Bulaga Kalyeserye,” Loresca posted his “Pia Wurtzbach walk” video, which garnered over 24 million views in just a few days and caught the attention of the international media.

On Instagram, he happily posted a copy of the official invite from the producers of “The Doctors,”an hourlong daytime program that focuses on health and medical issues.

In one of his videos, Sinon is shown sexily strutting in his blue underwear, wearing shoes with 6-inch heels and baring his 6-pack abs and overly toned muscular body.

At the end of the video, he is heard yelling, “Maxine Medina, 26, Philippines!” Medina was the Philippines’ bet in the recently concluded Miss Universe 2016 beauty pageant held in Manila.

In another video, captioned “My first walk as Miss Universe,” he does a Pia Wurtzbach, walking queenly in royal blue gown with thigh-high slit. He waves and blows kisses to an imaginary crowd as he walks through the sidewalk.

Overwhelmed by the global attention, the buff comedian posted another video of him, this time tearfully thanking his “dabarkads” (close friends) for making his videos trend worldwide. He then promised to keep making people happy through his funny antics.

While emotional, he still managed to make fun of his speech by talking as if he was in a question-and-answer portion answering the Pia Wurtzbach way.

“Thank you guys for bringing my catwalk to the world—or to the universe rather. Thank you and I love you all. I promise to all of you I keep myself posting on social media funny videos,” he said.

He then proudly promoted his next stint on the “runway.”

“At abangan niyo po ang susunod kong catwalk (Watch out for my next catwalk). This is for all of you, especially in the whole world. I love you po, thank you,” he said with a flying kiss.

Sinon was previously based in London where he worked as a fashion model.

Before going to London, he lived in Masbate, one of the provinces in the Bicol Region, and later in Manila in search of a better life. He used to stay in Pasay City and Payatas in Quezon City.

Through the help of his sibling, he was able to go to London.

He came back to the country when felt he had saved more than enough to be of help to the needy. “Kung anong mayroon ako, gustong kong matulungan din ang ibang tao (From whatever I have I want to help others),” he said in an interview with Cata Tibayan of GMA News.

He got into show biz when he acted the role of a bodyguard to the De Explorer Zobeyala sisters played by the comedic trio of Jose Manalo (Lola Tinidora), Wally Bayola (Lola Nidora) and Paolo Ballesteros (Lola Tidora) in the hit Kalyeserye of “Eat Bulaga.”