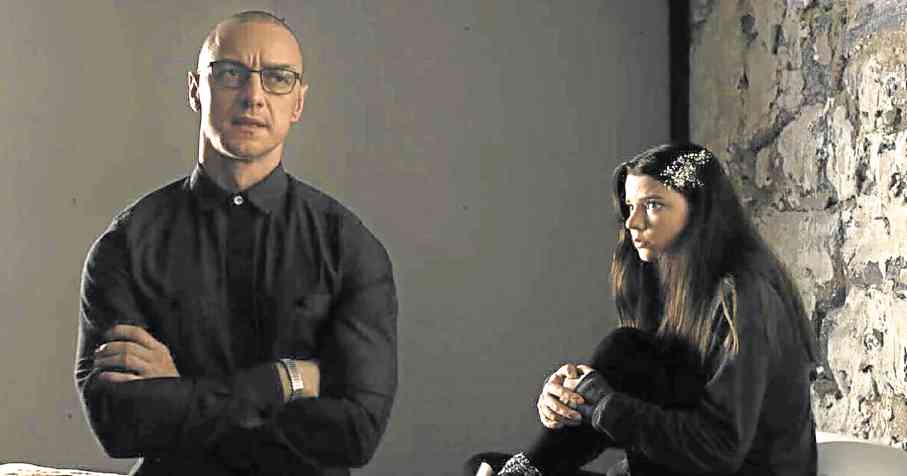 This is the bizarre psychological aberration that a person suffers when he’s so traumatized by negative experiences as a child that he or she is “broken up” into many difficult personalities, all living and serially making themselves manifest in a single body!

That may sound like pure “psycho fiction,” but it exists, and some movies have been made about it in the past, led by the 1976 Sally Field starrer, “Sybil.”

This time around, Shyamalan’s cinematic take on the bizarre disorder focuses on a man, Kevin, who has 23 different personalities inhabiting his traumatized body.

To get along without “killing” each other, they have worked out a weird modus vivendi that requires them to “wait for their turn” to manifest themselves and come “into the light.”

The most dominant personalities—Dennis, Barry, Patricia and Hedwig, are entitled to more “face and space” time than the others, so they figure more prominently in the film’s storytelling.

The movie’s specific plotting starts when one of them kidnaps three teenage girls and prepares them for a strange “mission,” which turns out to be the care and feeding of a “monster” who will rule everybody’s lives.

At first, this monster sounds like the fictive creation of the personality group’s combined imagination—but, the time comes when bizarre fiction becomes virulent and violent fact!

Needless to say, “Split” provides McAvoy with a great opportunity to display his creativity and versatility. He goes from man to woman, including sometimes coming across like a 9-year-old boy!

McAvoy does measure up to the daunting and dizzying challenge, but after a while, his achievement feels too technical to be truly moving.

We admire him for being so ferociously versatile, but the personalities he creates fail to sufficiently connect with us on an emotional and empathetic level.

Fact is, the most focused and cogent portrayal in the film is turned in by Betty Buckley as the psychiatrist who has been trying to help the “shattered” Kevin try to live as normal a life as possible, for years now.

She did manage to help him get his act together enough for him to hold on to a job, but as the film progresses, her best efforts unravel as Kevin and company set the stage for the arrival of their monstrous lord and master.

Despite its limitations and liabilities, “Split” is still an instructive view, because it reminds us of the largely untapped potential and power of the human subconscious. It’s been said that we use only 10 percent of our potential, and films like “Split” and “Sybil” “prove” this with their highly dramatic depiction of individuals who have managed to tap into this unused reservoir in the human psyche.

Unfortunately, these depictions end on a negative, scarifying note—but, positive lessons can still be learned, if we turn their “dark and dangerous” tales around, and focus on the good that can be derived from them.