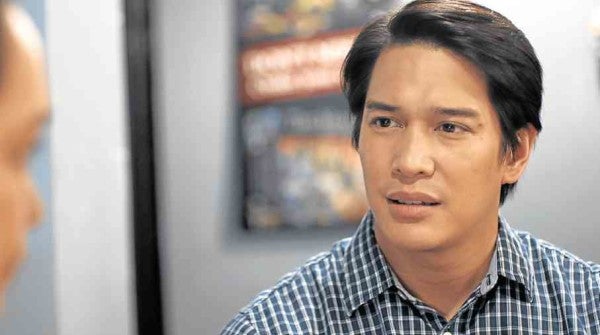 Just because he is about to get married soon does not necessarily mean that Luis Alandy would stop accepting projects that would require him to show some skin.

According to Luis, his nonshow biz fiancée fully understands what his job as an artist entails.

Luis related that his soon-to-be wife, Joselle Fernandez, actually watched “Anino,” which he thought was perceived as “controversial” by the local audience because of the nudity in it.

“She then recommended it to her family members, who are just as open-minded,” he said.

But should he find himself having kids in the future, Luis surmised that he may have to reconsider the way he approaches his career.

“I do not want my children to see me doing sexy scenes onscreen. But by that time, I will be older and will probably not get offered such roles anyway,” Luis told the Inquirer at the recent premiere night of the movie “Swipe,” which is currently showing in cinemas.

Luis and Joselle will tie the knot in a private and intimate garden wedding in Tagaytay City on Feb. 17.

He could not be more excited. “I am looking forward to a new chapter in my life,” he said, adding that he had been quite hands-on with the wedding preparations.

“We always meet with the planner and the suppliers. We picked the flowers and invitations. It is a lot of work—but I do not mind because I will be marrying the woman I love, and I want to give her a dream wedding,” said Luis, who described Joselle as having “good values,” the “one I have been looking for.”

Luis is turning 37 this month; his fiancée is 23. But that does not matter, he said, because they share lots of things in common. “We have similar likes and dislikes. We enjoy the same hobbies. We both love watching movies. We simply jibe,” he jested.

In “Swipe” (Aliud Entertainment and Viva Films), Luis plays Leo, the manager of an apartment complex occupied by tenants who have had unique experiences using the eponymous online dating application.

“It is a montage of stories… about how different people use dating apps—some use them simply because they’re bored, some use it for hookups, some want to have someone to simply hang out with and others just want to find someone they are compatible with,” said Luis, who has never tried using one.

“Even if I were single, I probably wouldn’t try it,” Luis said. “I still prefer meeting new people in person.”

Read Next
Millennials take center stage in Bituin’s ‘story-centric’ Valentine show
EDITORS' PICK
Metro Manila’s daily COVID-19 growth rate drops to 2% — Octa Research
Over 3 Million worth of prizes to be won at Smart Padala’s SENDali Manalo Promo!
SMDC’s Bloom Residences: A master planned community that cares for your health and wellness
What to expect as Metro Manila starts ‘no vaccination, no ride’ policy on Monday
COVID-19 cases in PH pass 3.2 million mark with 37,154 new cases — DOH
Upsilon, Unilever give ‘real talk’ on climate change crisis
MOST READ
IATF protocols now apply to travelers who arrived on or before Jan. 13
‘Not my loss’: Did Kris Aquino just comment on her breakup with Mel Sarmiento?
Thailand records first Omicron death
Tito, Vic and Joey still not quitting, breaking trends as they celebrate 50th year in the biz
Don't miss out on the latest news and information.