Dayanara wanted to be an orthodontist before becoming a beauty queen 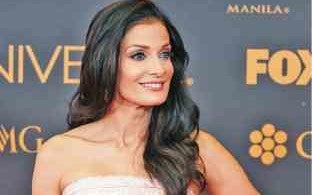 Now that the queen is back on Philippine soil, she has been busy doing projects left and right. Just recently, she also guested on ABS-CBN’s “It’s Showtime” where she revealed her childhood dream prior to becoming Miss Universe.

The Puerto Rican beauty gamely played at one of the show’s top segments called “Trabahula” but before she headed on with the game, she first happily chatted with hosts Anne Curtis, Vice Ganda and Vhong Navarro, with guest host Kim Chiu.

After the warm welcome she was given, she was asked what she wanted to do in life before she became a beauty queen. The 42-year-old actress-model said she actually wanted to be an orthodontist, because she had teeth problems and was wearing braces for eight years when she was young.

The audience of “It’s Showtime” evidently showed Yari (that’s Dayanara’s nickname) how delighted they were to have her back on board. Vhong Navarro even introduced himself as a member of the Streetboys, the all-male dance group which used to back up for Torres during her “ASAP” dancing days.

She was again credited for her impeccable dancing skills and exceptional beauty, as she she reclaimed her dancing queen throne via a 9-minute comeback performance on “ASAP.” She was happy to talk about it and said that even her kids were surprised with their mom’s all-out grooves.

The audience then could not help but ask for a “sampol” (sample) from the dancing queen.

True to the audience’s demand, Torres danced to one of the biggest 90’s dance tunes, “Ragamuffin Girl”, with Vhong Navarro.

The audience was so delighted, not only with seeing Torres acting and dancing in the Philippines, but more so knowing that the foreign beauty queen who was well-loved by them has a possibility of staying longer in the country again.

In her much-anticipated and highly-lauded dance comeback on “ASAP”, Torres said that if she could bring her two boys with her, then she could stay longer.

Torres is not only remembered as a beauty queen and a dance empress but also as a notable personality that was once linked to former matinee idol Aga Muhlach. They had a four-year relationship. After their break-up, she fled the Philippines to go back to Puerto Rico.