The ‘monster’ is still a mother 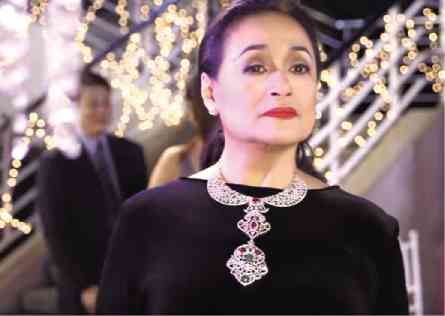 Coney Reyes in “My Dear Heart”

The new drama series, “My Dear Heart,” on ABS-CBN, had a solid start last Monday, paced by the archly “antagonist” portrayal of Coney Reyes as an ambitious and heartless medical luminary.

Practically single-handedly, she causes most of the problems and grief in the show, making life a living hell for its good guys, led by Zanjoe Marudo.

What has he done to end up on her “most hated” list? He has made the big mistake of being born poor and winning the heart of Dr. Margaret Divinagracia’s beloved daughter (Ria Atayde).

Worst of all, he gets her pregnant, thus drastically confounding her life and career prospects, so the “good” doctora orders her menacing minions to ruin his life.

Her wish is their command, so Zanjoe quickly loses the girl, their love child and his college scholarship, forcing him to consider breaking the law to keep body and soul together.

What about the love child, who will soon become the series’ resident “angel?” A wild plot twist has the baby girl being furtively taken away from her mother right after birth—but, being unexpectedly kidnapped by a nurse who’s also a baby-seller!

That initial improbability is quickly trumped by other loopy sleights-of-plot—like the nurse losing a prospective buyer, and leaving the unwanted child with a stranger at a bus terminal—who turns out to be the baby’s father, Zanjoe! Uh, can we go to a long commercial break to digest all that?!

After the initial telecast we viewed, the likely developments include: Zanjoe still not knowing that the baby is his—but deciding, despite his penury, to adopt her.

The mother’s baby being told that her child was stillborn, causing her to pine away in extreme guilt and grief.

Dr. Margaret ordering the wide-ranging search for the missing child, which her grieving daughter must not know anything about, so she can “move on” and resume her once-wonderful life and prospects.

Even as those real or fancied developments take place, a subplot emerges that threatens to take over at least some of the series’ storytelling: It involves Zanjoe’s neighbors, the similarly poor Estanislaos (Joey Marquez and Rio Locsin), whose daughter (Bela Padilla) has been secretly in love with Zanjoe for years.

In addition, Dr. Margaret has to contend with another family, this time the wealthy and powerful Camillus clan of doctors (Robert Arevalo, Eric Quizon, etc.), her rivals in the high-stakes medical trade.

On top of all this, it looks like the baby, now named Heart, will turn out to be desperately ill, and Dr. Margaret will try to save her life (unaware of their actual relationship).

But “something” will happen to take the new series to its “next” level, which has a “one step beyond” twist that makes the show tantalizingly different from most other drama series on the tube!

With so many subplots, levels and contentious families to keep tabs on, “My Dear Heart” should turn out to be an unusually “eventful” show.

Let’s just hope that its scriptwriters will be able to keep their storytelling clear, logical and well-delineated, despite some evidence to the contrary already on view.

It’s a good thing that Coney Reyes is figuring so strongly in its plotting, because the show’s clear focus on her helps keep it on an even keel.

Also welcome is the fact that she may be the story’s resident villain, but she’s also astute enough to keep her villainy “human” and well-motivated.

So, we aren’t reduced to watching a vengeful “monster” in full froth, but a mother “mistakenly” expressing her “extreme” love for her delinquent daughter.