Another Filipina has been tapped to join the London cast of the musical “Hamilton.”

Following the reports of Rachel Ann Go joining the musical, Christine Allado, an actress and singer who just finished a run in the West End production of the musical “In the Heights” by Lin-Manuel Miranda, is also set to join “Hamilton,” her second time working in a musical with Miranda.

“Hamilton” is a Tony and Pulitzer-winning musical about the life of American founding father, Alexander Hamilton.

Allado on Friday expressed her excitement on Facebook, where she also revealed the characters she will be playing.

“Can’t even express how happy and grateful I am to be joining the original London cast of Hamilton: An American Musical as Peggy Schuyler and Maria Reynolds. Thankful and excited and so thrilled for this project which I have been a massive fan of and now get to be a part of!” she wrote.

She also mentioned Go in the post, who has been earlier cast as the musical’s Eliza Hamilton. 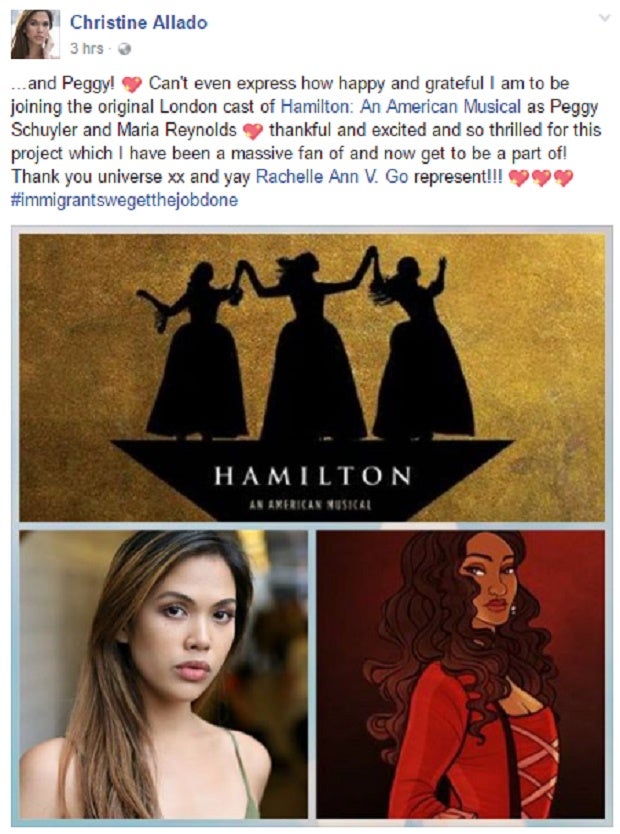 Allado started her theater career in the Philippines before moving to Hong Kong, then London.  And prior to “In the Heights,” she also joined the cast of the London production of David Byrne and Fatboy Slim’s acclaimed musical on Imelda Marcos, “Here Lies Love” as Imelda.

According to Broadway World, the rehearsals for “Hamilton” are scheduled to begin in September 2017. The production will begin previews on November 21, with an opening to follow on December 7. CDG