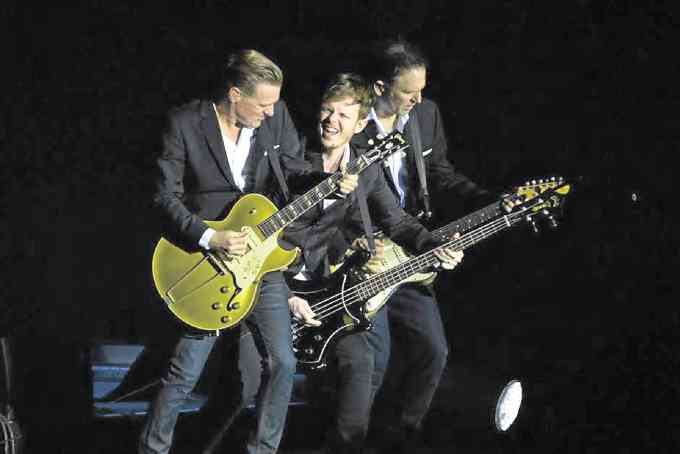 The singer (left) and his band played over two dozen songs. 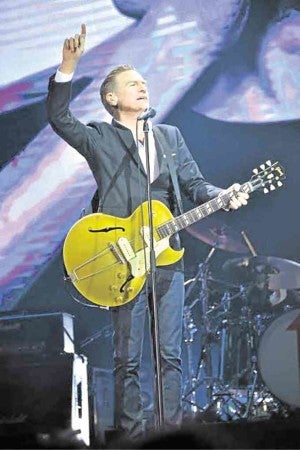 Adams was onstage for about two and a half hours. —PHOTOS from Wilbros Live

It was 24 years ago when Bryan Adams last held court in Manila. So, when he finally returned on Wednesday, before a packed crowd at the Smart Araneta Coliseum, there was a sense that he was trying to make up for lost time. And he was not about to waste any more of it.

The Canadian recording artist opened the show in a no-nonsense fashion, blitzing through the first couple of rousing pop-rock anthems on his set list, from the moment the lights sprang to life.
Adams, who had six studio albums to his name during his previous visit in the country, had since released seven more—there was a lot of music to be played.

Some of them needed introduction, like “Go Down Rockin’,” a bristling and catchy tune that evoked 1980s nostalgia, from his 13th and latest album, “Get Up.” Then, there were those that didn’t need more than a few opening notes to get the audience going.

The rock ballad “Heaven,” one of his most recognizable hits, started out much like its iconic 1996 performance at the Wembley Stadium, with Adams hoisting and turning his microphone stand toward the fans and letting them sing the first verse. And when at last the successive crashing of cymbals signaling the chorus filled the venue’s every nook, the crowd erupted into deafening screams, as Adams took over with his soaring tenor.

From the get-go, it was apparent that Adams’ vocals have remained largely intact. If there was any loss of quality at all, Adams showed no signs of it with the intensity in which he attacked his most demanding of songs. And more often than not, he sounded just as good as he did on record.

Adams growled his way through the jaunty, arena rock surge of “Summer of ‘69,” which had him running across the stage.
In the sultry rendition of “Have You Ever Really Loved a Woman?”—with Adams’ longtime collaborator Keith Scott on the Spanish guitar—the singer displayed easy power in his belting.
Meanwhile, in his acoustic performances of “Here I Am” and “Let’s Make a Night to Remember,” it was the signature rasp in his tone that shone.

As all these happened, the screen behind that spanned the width of the stage showed an assortment of creatively and tastefully crafted visuals: black and white videos of him goofing around with his band; vintage clips from his younger years; the shots and angles used for the live feed looked cinematic, and at one point was composed of a mosaic of head shots of fans—perhaps manifestations of Adams’ artistry as an award-winning photographer.

Adams, 57, ended up being onstage for about two and a half hours, singing 29 songs, which included covers of Elvis Presley’s “All Shook Up” and Eddie Cochran’s “C’mon Everybody” during the encore.

Other highlights of the shows (mounted by Wilbros Live) were Adam’s performances of the bluesy “If Ya Wanna Be Bad Ya Gotta Be Good,” where he asked a female spectator to dance seductively as he played; and of the power ballad “Please Forgive Me,” which he said was the most in-demand in social media, “with 14 requests from the same user.”

Toward the end, Adams related that some of his Filipino friends back home had told him that their relatives would be watching him in the Philippines. They were right.
“It seems like all their cousins, uncles, aunts and grandparents are here,” said Adams, who took a selfie with the crowd, which he promised to post on Instagram. “Thank you for the beautiful singing!”