Citing reliable sources, the Philippine Entertainment Portal, or PEP, said Padilla is believed to be bearing a child with boyfriend Aljur Abrenica, a fellow Kapuso star.

Earlier, the couple was rumored to have rough sailing, but a close friend from Abrenica’s camp claimed that, on the contrary, the two were “very much in love.” In 2014, they ended their relationship, citing such reasons as Abrenica’s alleged infidelity and Padilla’s father Robin’s disapproval of their relationship. But the two reportedly reconciled late last year, declaring their sweet “second chance” on social media.

Padilla and Abrenica have remained tight-lipped about the pregnancy issue.

However, last December 28, Padilla hinted at this by posting a cryptic message on her Instagram account, which she captioned, “So kilig with this twitter page ✖️” and which included intriguing words like “fragile age” and “little child.”

The 23-year-old actress was also reportedly seen going to an OB-gynecologist. Likewise, some viewers noticed that Reyna Amihan’s costumes were getting loose lately in contrast to her previous figure-flattering costumes.

All this fueled an online buzz that probably the young actress was indeed going through “something.” A bolder hashtag shouted #BuntisSiAmihan.

Abrenica, meanwhile, has been getting hate messages from netizens who blamed him for Reyna Amihan’s (Padilla’s character in the Kapuso fantaserye “Encantadia”) rumored departure from the show because of her condition. 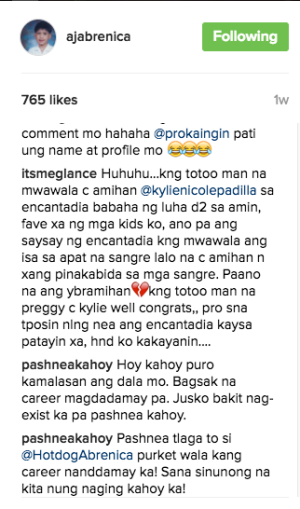 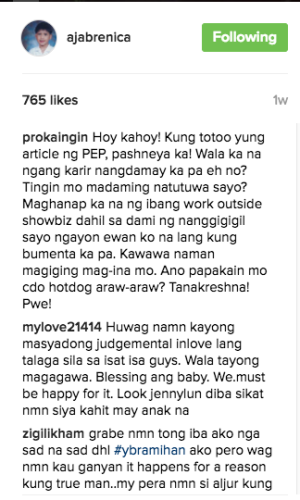 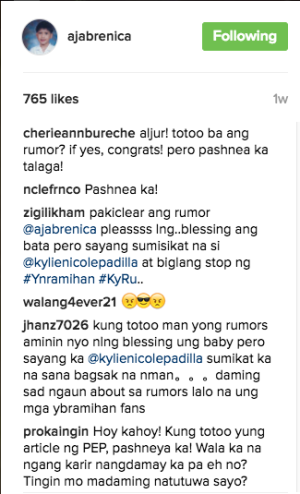 “Encantadia” director Mark Reyes himself hinted at Padilla’s departure from the series via an Instagram post, saying a sang’gre (princess) would soon bid farewell to the show. This was then followed by shocked and saddened reactions from the netizens using the hashtag #WagSiAmihan.  Clarizel Abanilla