On the train with Idris Elba 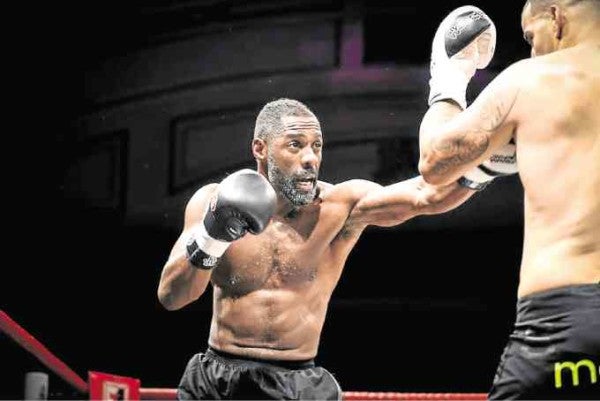 The actor in “Idris Elba: Fighter”

This story is more than one year in the making—and it involves the Golden Globe-winning actor widely regarded as the most viable option to carry James Bond’s license to thrill after Daniel Craig. Yes, we’re talking about Idris Elba.

And we’re proud to say that Inquirer Entertainment has been a part of the dashing British thespian’s year-long endeavor that culminates in “Idris Elba: Fighter” on the Discovery Channel on Jan. 29 at 8:10 p.m.

The reality show follows the actor as he embarks on a “journey of self-discovery” to fulfill his lifelong dream of becoming a professional kickboxer—in merely 12 months! Idris’ foray into kickboxing began in November 2015 after former Muay Thai fighter Warren Brown, his coactor in the TV series “Luther,” introduced him to fighting trainer Kieran Keddle.

Four months after Idris began his “multidisciplinary” training in different countries, including Cuba and Thailand, we tagged along Discovery Asia’s Gayle Tan and Charmaine Huet to observe Idris’ stopover in Japan and chat with him about his latest adventure.

But we must admit that meeting Idris for the first time was initially intimidating. With his brooding good looks and towering frame (he’s 6’3”), the actor is hard to miss on a platform of the Shinkansen station in Kyoto. We were on our way to watch the 2016 K-1 kickboxing showcase at Korakuen Hall in Tokyo.

When we sat beside Idris on the train for this interview, he told us that the decision to take on the challenge was something personal. “I don’t make decisions to please the fans,” he said, as he put aside the scripts of two films—Stephen King’s Western horror flick “The Dark Tower” and “Thor: Ragnarok”—that he was studying during the two-hour and 20-minute trip. 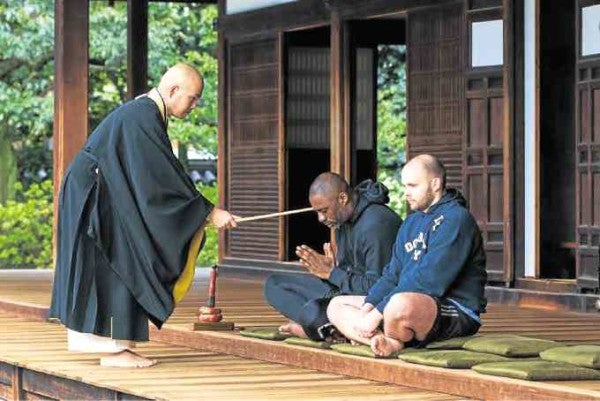 A monk performs a rite with Elba (center) and trainer Kieran Keddle.

“People expecting a fake fight will be disappointed. It isn’t a trick,” he stressed. “The show is more of an experiment, really. Is it possible for someone my age (he’s 44) to learn a new skill? It’s also about transformation of health and fitness. I used to kickbox when I was 25, for about two years. But I didn’t do it for a long time, so I decided to give it a shot as a professional.”

But the first few months of Idris’ workout regimen were very hard, because he said he was initially unfit for the challenge. The change of diet and his four-stage training program were very tough on him because they required—no, demanded—a lifestyle change.

The actor didn’t like waking up at 5 a.m. and doing three-mile sprints. And the fact that he was shooting two films while he was training for his scheduled fight with a professional kickboxer didn’t make the training any easier.

Idris was polite but wasn’t in a very cheerful mood the first time we talked to him because of an injury that set him—and the show—back a few months. In fact, the rigorous sprints he had to endure a few hours before our trip to Tokyo was a painful experience for him.

“The first three or four months of training was about trying to get my fitness to a level where I could actually train for fighting,” he later revealed. “The injury was quite severe, and the doctors told me that I shouldn’t fight. Anyway, we decided to keep training (for cardio, strength and muscle conditioning), and I had to sort of repair myself for that.

“When I was eventually cleared to fight, it became about learning how to become a K-1 fighter. K-1 is a less-brutal derivative of Muay Thai, so you’re not allowed to use elbows, spinning back fists and certain clenches. I had to do pad and bag exercises and lots of core work, which involved burpees, sit-ups and mountain climbing. The last stage was about ringcraft and strategic fighting, which was most rewarding, because that was when I truly started to ‘become’ a fighter.” 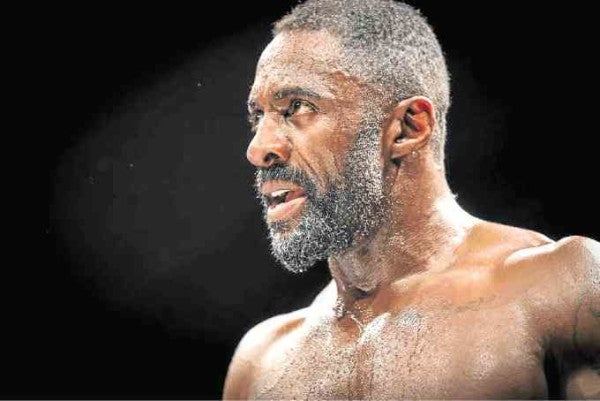 Idris Elba embarks on a “journey of self-discovery.”

After our interview on the train, when we saw Idris again later that night for the K-1 event, he was already in high spirits. After the fight, he greeted us with a big smile and asked what we thought of it. To say the least, Idris was as impressed as we were about the 20-or-so emotion-filled mano-a-mano matches that we just witnessed.

Other than the hectic fights, the dramatic sidelights were a stirring sight to behold: Losing fighters cried unabashedly, while a retiring pugilist dedicated his triumph to his nonagenarian grandmother, who went up the stage to raise his arm for the last time.

But Idris’ mother wasn’t as thrilled about the whole thing. “My mom was worried,” he admitted. “She came to one of the fights, and it was pretty harrowing for everyone who knew me. I drew that fight, but I got knocked down in the third round. My mom was the only one in my family who said, ‘This is silly. Don’t let him kick you in the head! What are you doing this for? Do you need your asthma inhaler?’ I was like, ‘Mom, please be quiet.’

“My daughter was very much into it. In Thailand, my son came to training with me. My kids are used to daddy being a bit stupid in that sense. My family was worried about me, and I don’t think I’d want to put them through that again. I’m 44 years old, and fighting is definitely a young man’s sport.”

How hard was it for Idris to convince the filmmakers of “The Dark Tower” and “Thor: Ragnarok” to allow him to continue sparring? Idris quipped, “They had no choice. The project predated those movies. I was already doing it by the time I got onto both films. I was respectful of the requirements of my day job.”

“I wanted to give up a few times. I was told in my early training that I had a severe back injury, and not giving up was tough. But it was a personal discovery for me. When you’re training for a fight, you take more losses than you take wins. My ego was deflated many times, which turned out to be good for me. I was being beaten down by people that my ego thought I could handle.”

His training in Cuba was particularly memorable for Idris, as was his trip to Kyoto, where he trained with a sensei. His Japanese mentor taught him about pain control, how to break wood with his hands, and how to ‘tense’ his body whenever he’s being kicked or punched.

“In Kyoto, I meditated for the first time in my life,” Idris disclosed. “It was quite moving because, for some reason, I started to cry. I was literally in a flood of tears! But it wasn’t sadness—it was some sort of release.”