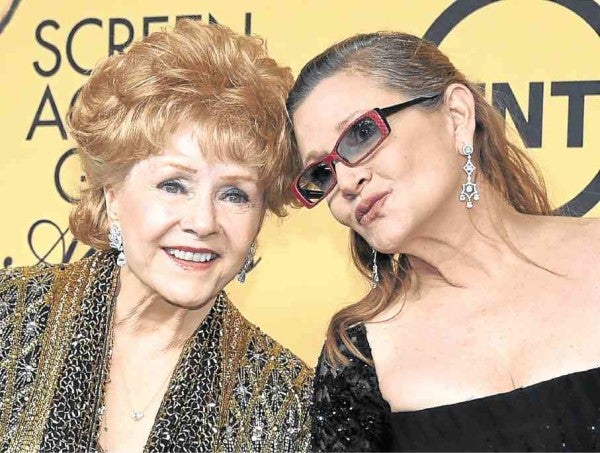 What was it about the year 2016 that impelled it to do its worst, and end up as the decade’s most daunting annus horribilis to date!

The Latin term, brought back to popular usage by Queen Elizabeth II to describe her own especially woe-full year in 1992, succinctly sums up what we’ve all just gone through—a gauntlet of daunting experiences and unwelcome surprises that we hope and pray to transcend and triumph over in 2017.

Indeed, as December 2016 swung around and fans thought that the worst was over in terms of the Grim Reaper’s swatch of stellar victims, the feared and hated executioner seemed to redouble his deadly efforts, to beat the ticking clock!

His “last” victim only a week before the terrible and horrible year ended was Carrie Fisher, who was only 60. But, for tragically bad measure, just a day later, her mother, Debbie Reynolds, opted to join her in the entertainment world’s Elysium, at age 84!

The compounded shock of the twin tragedies was too much for some fans to bear, especially because the mother-and-daughter tandem were among Hollywood’s most celebrated leading lights.

Carrie was famous, not just for her “signature” role of Princess Leia in the “Star Wars” film franchise, but also as a screenwriter, book author, pithy pundit and winsomely winking wit.

Her abrupt exit at only 60 was especially felt and rued by her fans because, not long ago, in the new “Star Wars” episode, her Princess Leia had returned to the screen in maturity—and she had already shot her scenes for the franchise’s next sci-fi blockbuster.

These “revival” events made Fisher’s fans look forward to more screen and literary encounters and adventures with her—which, alas, are not to be.

Debbie Reynolds’ shocking departure is of even greater and deeper consequence and loss to mature film fans, who still glowingly remember her exceptionally brilliant career in musical films, launched when she was only 19 years young with the new iconic film, “Singin’ In The Rain.”

Debbie was as cute as a button, feisty as all get-out and, quite amazingly, was not upstaged by her far more experienced and popular costars, Gene Kelly and Donald O’Connor, as they hoofed and sang their way to Hollywood heaven!

After that magnificent screen debut, Debbie went on to have a long and truly stellar career, capped by another iconic performance in “The Unsinkable Molly Brown,” the “unsinkable” part of which is now being used to refer to her own gutsy persona.

She needed to be a survivor, because her life off-screen dealt her a series of very low blows, including being dumped by her husband, Eddie Fisher, who scandalously ran off with Elizabeth Taylor!

She was also notoriously fleeced by her subsequent husbands—so, sinking was not an option!

Most poignantly of all, the twin departures of Carrie and Debbie hit their fans really hard, because for more than a decade, they had been estranged from one another. But, they were able to reconcile and make up for lost time before their dual exits—a consoling coda for a grim show biz year harshly marked and scarred by stellar tragedies!