Angeline Quinto takes on her most daring role in “Foolish Love” 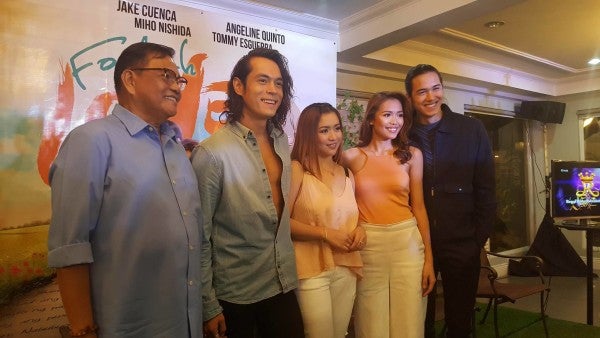 Singer-actress Angeline Quinto is taking on her most daring role yet with Regal Films’ first offering for 2017, “Foolish Love” together with Jake Cuenca, Tommy Esguerra and Miho Nishida.

Angeline plays an agitated woman who worries about her love life as she, in a few years will be turning 30, and is obsessed and desperate to meet the one. She then meets Jake who, coincidentally, shares the name with the guy in her dreams, making her think that destiny is at work, and launching the conflict in the story.

Given a good holistic package, being a ladies’ man has never been a problem for matinee idol Jake Cuenca and because he’s encountered a number of women personally and professionally, he’s become acquainted with almost all kinds. But admittedly, Jake says Angeline does not breed the same with all the women he’s known before.

“To tell you the truth, she’s not like the rest of the women I meet, but I see what’s special in her,” Jake said, citing his co-star’s simplicity, and many other good traits and values.

Although not seeing romance in the near future, Jake was quick to clear out that love is not on his list of priorities as of the moment.

“I’m not having a girlfriend anytime soon,” he clarified. “I’m at a point in my life where I’m rebuilding a lot of things. I’m adjusting to my age now, and I’m not getting any younger too,” he added.

Angeline admits she has never done anything that is as closely bold and provocative in her life. She was brought to her most uncomfortable situation when she did the much talked about daring love scenes with Jake. However, she is proud to say that she was supported by the entire production team, the director and especially, Jake.

“Sinunod ko lang naman po yung sinabi ni Direk, na kailangan ko pong makipaghalikan kay Jake (I just really followed what our director said, that I have to kiss Jake),” she joked. She particularly commends Jake for taking good care of her despite her nervousness and making her comfortable in those delicate scenes.

“I held her hand, whispered to her, and helped her through that very emotional scene,” Jake shared.

“Foolish Love” will be showing on theaters nationwide on January 25. It is Regal Films’ first offering for 2017, directed by Joel Lamangan.