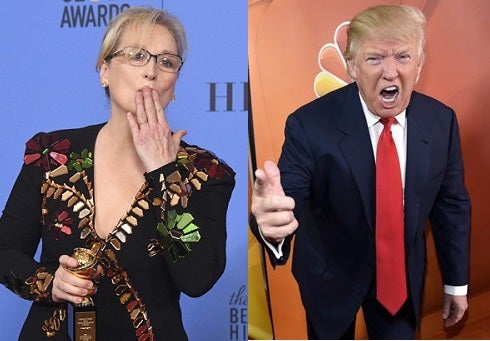 NEW YORK, United States — Donald Trump took on one of the Hollywood greats Monday, accusing Meryl Streep of being an overrated actress and a Hillary Clinton “flunky” after the multiple Oscar winner tore into him at an awards ceremony.

In what has become an early morning custom for the notoriously thin-skinned Republican president-elect, Trump took to Twitter to settle scores with the three-time Oscar winner just hours after her public broadside.

“Meryl Streep, one of the most overrated actresses in Hollywood, doesn’t know me but attacked last night at the Golden Globes,” Trump wrote. “She is a Hillary flunky who lost big.”

Streep berated Trump for his divisive rhetoric as she received a lifetime achievement award at the Golden Globes on Sunday in Los Angeles.

The 67-year-old fought to control her emotions as she received a standing ovation during her acceptance speech for the Cecil B DeMille Award, handed out by the Hollywood Foreign Press Association.

“You and all of us in this room, really, belong to the most vilified segments in American society right now. Think about it. Hollywood, foreigners and the press,” she said to her peers with a laugh, referencing Trump’s campaign that frequently disparaged immigrants and what he called biased media.

The US entertainment industry broadly supported Trump’s Democratic opponent Clinton, with many stars publicly endorsing her White House run and pumping millions of dollars into her campaign war chest.

Streep trashed the incoming president and singled out an infamous campaign speech during which he did a decidedly unflattering impression of disabled New York Times reporter Serge Kovaleski.

“The person asking to sit in the most respected seat in our country imitated a disabled reporter — someone he outranked in privilege, power and the capacity to fight back. It kind of broke my heart,” she said.

“This instinct to humiliate, when it’s modeled by someone in the public platform, by someone powerful, it filters down into everybody’s life, because it kind of gives permission for other people to do the same thing.”

“When the powerful use their position to bully others, we all lose.”

Trump has denied mocking Kovaleski and again defended himself on Monday against Streep’s accusation.

“For the 100th time, I never ‘mocked’ a disabled reporter (would never do that) but simply showed him ‘groveling’ when he totally changed a 16-year-old story that he had written in order to make me look bad,” Trump said in a series of tweets.

Trump told The New York Times in a brief telephone interview that he was “not surprised” to be criticized by “liberal movie people.”

“The election is over. She lost,” Conway told Fox News.

“Everybody in that audience with very few exceptions was of a single myopic mind about how they wanted the election to go,” she said, criticizing what she called the “self-pity” of multi-billion-dollar industry Hollywood.

“Talking about how vilified poor Hollywood is, in their gazillion dollar gowns? Can I borrow a couple of those for the inaugural please?” she said.

“Somebody with a platform like Meryl Streep is also I think inciting people’s worst instincts, when she won’t get up there and say, ‘I didn’t like it, but let’s try to support him and see where we can find some common ground’.”

Streep spoke with less than two weeks to go until Trump’s inauguration.

“Hollywood is crawling with outsiders and foreigners. If you kick ’em all out, you’ll have nothing to watch but football and mixed martial arts, which are not the arts,” she said, holding back tears.

She urged the “principled press to hold power to account, to call them on the carpet for every outrage,” to cheers from the floor.

Streep, considered one of the greatest actresses of her generation, was presented with the DeMille award to mark a career which has seen her win eight Golden Globes and collect 29 nominations.

Star Trek actor George Takei was among those who leapt to her defense.

“A better president would take criticism without name calling,” he wrote in a flurry of his own tweets. “Just admit you’re a bully — and a liar,” he later added, along with: “What a small, small man. SAD!” CBB