But forget that scintillating metaphor. Viewers need not resort to abstraction to appreciate “Passengers’” merits and thrills—the straightforward yarn it spins is hard to dismiss especially after it introduces the plausible conflict and tension that keep the film’s narrative strands cohesive.

The space shuttle is transporting over 5,000 sleeping “immigrants” to planet Homestead II, in a journey that would take 120 years to complete. But when the hibernation pod of Jim Preston (Pratt) malfunctions, the self-sufficient mechanical engineer finds himself in a knotty bind—he awakens “just” 30 years after Avalon has left Earth. Worse, his SOS would take 19 years to reach home, and the earliest reply is expected 55 years later!

With no one to keep him company, except Arthur (Michael Sheen), the android bartender—and after entertaining thoughts of committing suicide—Jim finally finds the courage to execute the “answer” he’s been mulling over for a year.

The heretofore sleeping beauty believes that her “revival” was also due to a technical glitch. But how long can Jim keep his “reprehensible” secret from the woman he’s fallen head over heels in love with? After all, Aurora has been reciprocating his feelings for her because, as she cheekily explains, “Space is the one thing I don’t need more of.”

The complications that Jim and Aurora need to hurdle don’t end there, but Tyldum keeps the narrative excesses at bay by focusing on the relationship that unravels between the two lead characters.

With stunning set pieces creating the illusion of a mysterious parallel reality gorgeously unravelng in deep space, the 49-year-old Norwegian filmmaker (“The Imitation Game”) conjures up a fascinating fable about man’s flight to the stars, and fills up “the greatest migration in human history” with pertinent moral issues and questions whose answers don’t come easily.

And even when it seems like the production’s other supporting actors (who include Andy Garcia) are underutilized, it’s easy to let their needlessness slide because, as they say, you’ve got to learn to take the lumps if you want to enjoy the sugar. 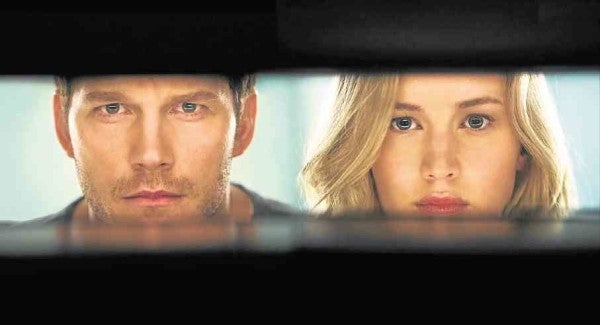