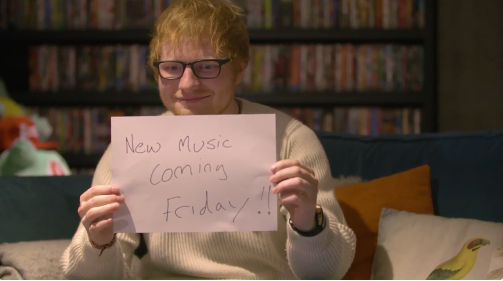 The long wait for a new song from British singer-songwriter Ed Sheeran is finally over as the pop sensation released today not one, but even two new songs, both made available to the public through social media and the singer’s official YouTube channel.

The two new songs — “Castle on the Hill” and “Shape of You” — are expected to be included in Sheeran’s much-anticipated third album “÷” (“Divide”), for release this year.

After being in a one-year hiatus from social media, Sheeran appeared in a teaser video of himself posted via his official Twitter account on New Year’s day. In the video, Sheeran held up a piece of paper with the words, “New music coming Friday.”

Exactly six days later, as Sheeran promised, he posted his new material of two new songs, with the tweet, “Cause I’ve been away for a bit here’s two singles rather than one – Castle On The Hill & Shape Of You.”

While fans have expectedly been elated by the news, music critics likewise were quick to listening to the two new tunes and in giving their early assessments.

“Castle on the Hill” was described as “a polished piece of drive time rock” reminiscent of “Born to Run” by Bruce Springsteen, while “Shape of You” reportedly “[crosses] dancehall influences with expertly tooled minimal R&B,” according to The Guardian.

On “Shape of You”, Taylor Weatherby of Billboard notes how the song “doesn’t quite sound like your typical Sheeran tune. But that almost serves as an indication of what [Sheeran] has been up to during his hiatus: creating music that still feels like Sheeran, just with a new twist.”

Sheeran’s last album was the chart-topping “x” (“Multiply’), released in 2014 to critical acclaim. A sophomore effort, the album was Sheeran’s first number one in the Billboard 200 charts, and also earned him two Grammy awards for Song of the Year (for the song “Thinking Out Loud”) and Best Pop Solo Performance.

While it has taken some time before the red-haired singer resurfaced with his two new songs today, he has not been totally absent from view. Sheeran appeared in another equally anticipated film last year, “Bridget Jones’s Baby”, playing himself. Jen Balboa