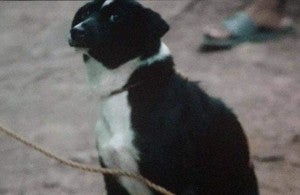 This is the dog killed in the making of the movie ‘Oro.’ Anna Cabrera, an official of of the Philippine Animal Welfare Society, who took the screenshot of the dog, said the dog was put in a sack, beaten to death, skinned and gutted. (SCREENSHOT/CONTRIBUTED PHOTO)

MANILA — Two dogs, not just one, died during the filming of “Oro,” according to a cast member who posted on social media on Tuesday, days after an animal rights group said it would charge the people behind the film where a scene showed a dog being slaughtered.

The Philippine Animal Welfare Society (PAWS) earlier urged people who knew the circumstances surrounding the dog’s killing to come forward. In a statement, PAWS said those who worked on Oro need not be afraid because the nondisclosure contract they signed was null and void because of the “immoral and criminal act that was committed.”

Actress Japo Parcero who played Joan on the political drama by Alvin Yapan said, “two dogs died, one accidentally and one deliberately.” She added that everyone involved in the movie “was gathered and inconspicuously asked to never tell anyone about the incident.”

Parcero said the production team bought the first dog from its owner who, “in his excitement to deliver the dog and receive his payment, tied the dog in a sack and unknowingly killed him by suffocation.”

Determined to carry on with filming the scene “which was in the script,” the production team bought another dog for butchering, Parcero reported. The actress, however, admitted that she did not personally witness the killing and the story was relayed to her only during the “Oro” cast party on Nov. 19.

Parcero said the actor who was asked to “bludgeon the dog to death” was “reduced to tears by the end of the scene because he also didn’t want to do it. He was just following directives.”

She added that she also learned that filming was delayed because the “lead actress,” Irma Adlawan, “stood her ground and threatened [to walk out] if they killed an animal.”

“I don’t know how they were able to convince the entire cast and crew to ever agree to such an unspeakable act but the words often used that night (at the party) were ‘for authenticity’ and ‘we believed in the vision,’” Parcero said.

“Oro” is among the eight entries to the ongoing Metro Manila Film Festival. The film won the best ensemble cast trophy and the Fernando Poe Jr. Memorial Award for Excellence, an award it was later stripped of following the controversy.  SFM