For many Hollywood stars, Christmas is time with family, watching a lot of screeners | Inquirer Entertainment

For many Hollywood stars, Christmas is time with family, watching a lot of screeners 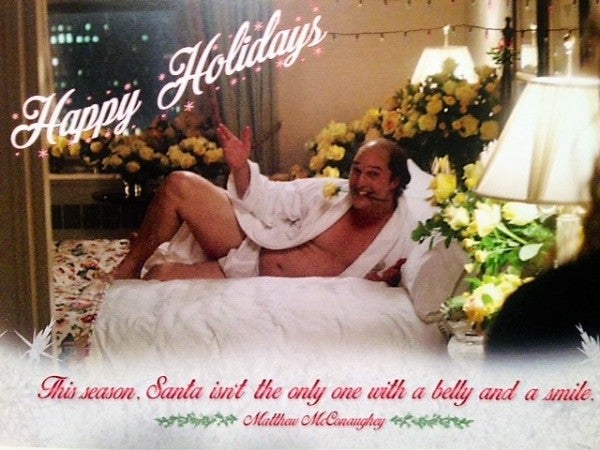 “Sexy, huh?” Matthew laughingly said about his holiday card showing him wearing a grin, white briefs and nothing else, from a scene in his new film, “Gold.”

Los Angeles—May Christmas find you smiling like Matthew McConaughey in his holiday card!

We asked the stars their Christmas plans, thoughts and memories. Since the holidays are all about kids, Ben Affleck said that he and Jennifer Garner are taking their children on a skiing vacation (even though the couple has amicably split).

Kathy Bates shared that since her dad was in the military and loved watching World War II movies, her happy Christmas memories were of watching a film like “Back to Bataan,” set in 1942 after the fall of the Philippines, with John Wayne playing Col. Joseph Madden, assigned to organize Filipinos to fight the Japanese invaders.

Several stars said that the holiday break means unplugging from the world and concentrating on watching screeners—those DVDs or digitally distributed versions that are advance screenings of films or TV shows.

Ben Affleck: I love Christmas and my family. We always go away. Jen and I will take the kids to a ski vacation for the holidays. They like to ski. That is the time that I look forward to all year. It’s a special family time.

Matthew McConaughey: Sexy, huh? (Matthew laughingly said about the holiday card he sent us. It showed him wearing a grin, white briefs and nothing else and is from a scene in his new film, “Gold.”)

We have the family together. We have a lot of foundation events we’re taking the family to, through December, to remind us all that it’s not only about fitting how many presents you can under the tree. Then, we’re going to go see some family on Camila’s (Alves, his wife) side that we haven’t seen in a couple of years.

Bryce Dallas Howard: What I have been trying to do lately, and there are so many companies that are doing this, is find products or gifts that have some sort of altruistic goals built into their business plan. It’s like Toms Shoes—you buy a pair of shoes, and a pair of shoes gets donated, or a feed bag.

What I try to do is I make a list of what those companies might be, then try to center things around that. But we have a rule in my family that we don’t give gifts over $50. Because we are Scrooge! Just so we don’t have pressure. We all have different kinds of jobs. It’s only for direct family members.

We get to open the gifts on Christmas Eve. We spend a lot of time together and watch a lot of screeners (laughs). And on New Year’s (Eve and Day) is black-eyed peas (a traditional New Year dish in America’s South for good luck).

We are always with my parents (director Ron Howard and Cheryl) in Connecticut. And Santa (Claus) stuff.

There’s never been a moment in, like, 35 years in my parents’ household where there hasn’t been young children around.

Edward Norton: I try to turn off the devices that we’re all enslaved to, catch up and watch my Academy screeners—really the greatest thing about being a member of the Academy, by far.

I don’t have to go to a movie theater to watch the best movies. But I also try to hang out with my family, turn off and go outside more.

Kathy Bates: My Aunt Lee, my mother’s sister, worked at Cokesbury Bookstore. She was in the children’s section and she would get advance copies of books. So every year, she would wrap them up but individually so that we would unwrap lots of things.

Even my parents got sent books. We would unwrap all the books, run into our individual rooms, spend the whole afternoon looking through the books and reading them.

My mother used to read to me when I was growing up. It’s from those books that I got my love for language and the spoken word. That was my happiest memory of Christmas.

[Now,] I like sitting at home watching screeners. I turn off the phone. I’m on hiatus. I never get out of my robe or nightgown. I curl up on the sofa with my dogs. I love watching screeners—just any kind of movies, really.  I’m glad that we have such a wonderful choice from other countries now. It’s fantastic.

(On the films she watched as a kid during holidays) I used to watch “It’s a Wonderful Life” and “Miracle on 34th Street.” Although most of the time when I was with my dad when it was the holidays—he was in World War II, in the Naval Reserve in San Francisco—we would watch movies like “Back to Bataan,” “Thirty Seconds Over Tokyo” and “The Bridge on the River Kwai.” He’d make popcorn, we’d sit and watch these movies.

Sienna Miller: We celebrate Christmas—we always aim to be elegant and organized. But it’s too much champagne, pajamas, screaming children and old films—“It’s a Wonderful Life” and “Home Alone” for the kids. It’s chaotic, bumbling and English. Yeah, I’ll be at home with all my family and friends in England.

Michelle Monaghan: For Christmas, I love oyster stew. I enjoy the holidays now more than ever, because you get to experience them through your children’s eyes.

We will be in Australia (she is married to Peter White, an Australian) this year. Christmas there is such an odd experience because we have picnic tables outside and it’s really hot. You’ve got [an inflatable] Santa holding a surfboard.

And people eat shellfish, like oysters, mussel, prawns and shrimp. I’m like, “You’re generally not gonna have turkey. You have fish.” So, it’s a whole different experience Down Under.

Christina Hendricks: I’ve started to share a Christmas tradition with my husband (actor Geoffrey Arend). We do [visit] his family one year and then my family the next year. Or sometimes—I think it was two years ago—we went to a romantic ranch in the snow in Montana with our dog. We do something different each year.

But to me, every year it’s about getting cozy in front of the fire. I always like to knit. I do like to cook a lot during the holidays—just a warm, snuggly feeling. I don’t like to stray very far from the house. I like being closer to friends. It is about relaxing. We work so hard all year long—it’s about resting and being together.

We usually do a fairly traditional American Christmas. We do a turkey. The stuffing is always the star of the show, all about the cornbread stuffing, so that’s always a big deal. And mashed potatoes and stuff.

My husband is part-Pakistani so sometimes, we try to bring in something with a Pakistani flavor.

His family likes to do the fish tradition on New Year’s Eve. They like to do the traditional raclette with cheese, pickles and potatoes.