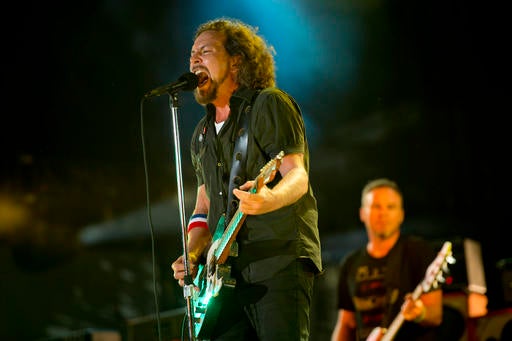 In this Sept. 2, 2012, file photo, Pearl Jam performs at the “Made In America” music festival in Philadelphia. The Seattle-based rockers and the late rapper Tupac Shakur lead a class of Rock and Roll Hall of Fame inductees that also include folkie Joan Baez and 1970s favorites Journey, Yes and Electric Light Orchestra. The hall’s 32nd annual induction ceremony will take place on April 7, 2016, at Barclays Center in Brooklyn, N.Y. AP

The rock hall also said Tuesday it would give a special award to Nile Rodgers, whose disco-era band Chic failed again to make the cut after its 11th time nominated.

Baez will be inducted only months after her 1960s paramour, Bob Dylan, was awarded the Nobel Prize for Literature.

Shakur was shot and killed after attending a boxing match in Las Vegas in 1996, a murder that has spawned conspiracy theories but remains unsolved. “Changes,” ”Keep Ya Head Up,” ”Ambitionz Az a Ridah” and “Life Goes On” are among his best-known songs. Only 25 when he died, Shakur left behind a trove of music that was released posthumously.

Pearl Jam exploded in popularity from the start in the early 1990s behind songs like “Alive,” ”Jeremy” and “Even Flow.” After Nirvana, it is the second band with roots in Seattle’s grunge rock scene to make the hall. Behind singer Eddie Vedder and other original members Mike McCready, Stone Gossard and Jeff Ament, Pearl Jam remains active and is a popular live act.

Vedder is no newcomer to rock hall ceremonies, having given induction speeches for Neil Young and the Ramones.

Baez was a political activist and mainstay of the folk movement, performing at the first Newport Folk Festival at age 19 in 1959. She was known primarily as an interpreter of others’ songs, introducing Dylan to a wider audience at the beginning of his career. Their affair ended badly in 1965, for which Dylan later apologized.

Baez’s own “Diamonds and Rust” in 1975 was one of her biggest hits.

Journey’s 1981 song “Don’t Stop Believin'” was given new life by being featured in the closing scene of HBO’s “The Sopranos” and became a favorite of a new generation. Its 6.8 million iTunes sales makes it the most-bought song on that platform from the pre-digital era, according to Nielsen SoundScan.

Former singer Steve Perry, estranged from the band for many years, offers some potential rock hall drama: will he show up for his induction? Founding member Neal Schon was quoted in Billboard recently saying that there are so many non-rock artists in the hall that “I don’t really care about being there.” He did allow that it would be nice for fans of the band, never a critical favorite. 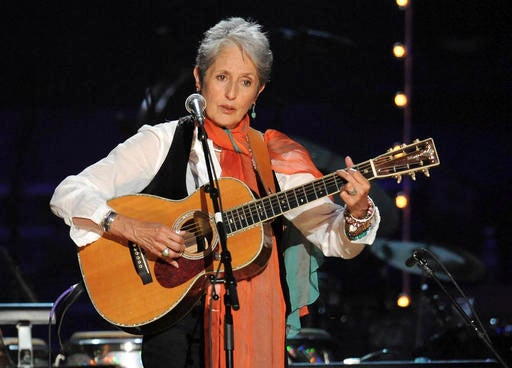 Britain’s Yes, known for its complex compositions, was a leader of the 1970s progressive rock movement. Yes’ hits include “I’ve Seen All Good People,” ”Roundabout” and “Owner of a Lonely Heart,” and its fans have waged a vociferous campaign to see them honored. Founding bass player Chris Squire, the one constant in many years of personnel changes, died in June 2015.

Electric Light Orchestra got its start melding classical influences to Beatles-influenced pop, and charted with “Evil Woman,” ”Mr. Blue Sky” and “Don’t Bring Me Down.” The band essentially exists now in leader Jeff Lynne’s imagination and home studio and had a mildly successful comeback a year ago.

Chic, led by Rodgers and the late Bernard Edwards, has become the rock hall’s version of Susan Lucci and her long quest to win a Daytime Emmy. While Shakur, Baez, Pearl Jam and ELO were elected this year in their first time on the ballot, Chic has endured years of disappointment.

The hall’s award for musical excellence to songwriter and guitarist Rodgers is no consolation prize. When disco cooled, Rodgers became one of the hottest producers in the business, behind the boards for some of the ’80s most indelible albums: David Bowie’s “Let’s Dance,” Madonna’s “Like a Virgin” and the B-52’s “Cosmic Thing.” TVJ

Read Next
WATCH: Keanu Reeves vows to ‘kill them all’ in ‘John Wick: Chapter 2’
EDITORS' PICK
Every Filipino home can now be a smart home with realme TechLife
PLDT Home Prepaid WiFi customers now under the care of Smart
Nestlé Philippines’ ‘NESCAFÉ Plan’ bags Grand Anvil at PRSP 56th Anvil Awards
Wesley So officially a US citizen
‘Pilgrim of peace’ Pope Francis heads to war-scarred Iraq
WHO: Arrival of vaccines in PH ‘a powerful step’ towards economic recovery, normalcy
MOST READ
Kris Aquino dispels rumors on son Josh getting married, thanks Ogie Diaz for defending him
Wesley So officially a US citizen
Ginebra trades Slaughter to NorthPort for Standhardinger
LTO’s P500-M deal for screws draws scrutiny
Don't miss out on the latest news and information.