Zsa Zsa Gabor, first US star famous for being famous, dead at 99 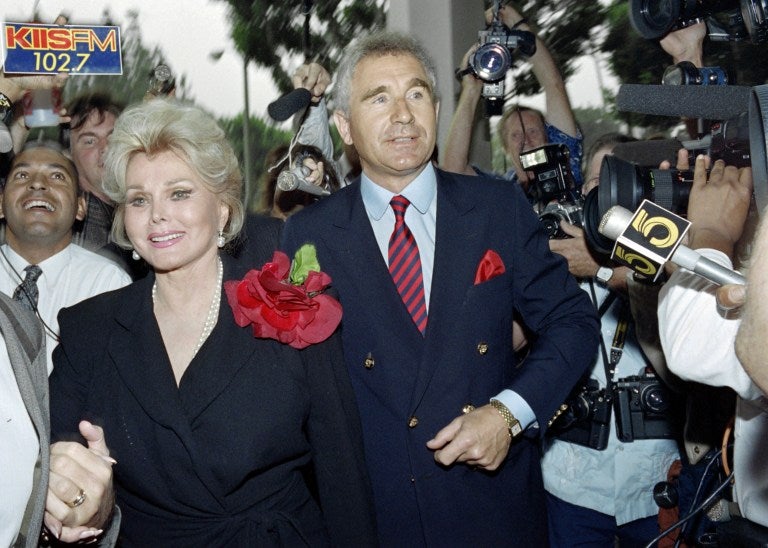 An emotional Frederic von Anhalt told AFP that Gabor had passed away at home surrounded by friends and family.

“Everybody was there. She didn’t die alone,” he told AFP by telephone, choking back sobs.

The pair married in 1986, making it her longest marriage.

Gabor, who in her heyday embodied the film industry’s platinum blonde ideal, was a voluptuous former beauty queen with a penchant for lame gowns that accentuated her hourglass curves.

Her resume includes a long list of film roles in such hit movies as “Moulin Rouge,” “Lili” and “Arrivederci Baby!”

But the actress was at least as famous for her conquests between the sheets as her triumphs on the silver screen.

Like her famous great-granddaughter by marriage Paris Hilton, Gabor was among the first celebrities to be famous for her celebrity.

Her thick Hungarian accent was much parodied — especially her penchant for calling everyone she met “darling” — or “dahlink” as she pronounced it.

It became her unique signature.

“I call everyone ‘dahlink’ because I can’t remember their names,” the socialite once said.

Born in Hungary on February 6, 1917, as Sari Gabor, Zsa Zsa was one of a trio of ravishing sisters known for their shapely curves and passion for well-heeled men.

Her sisters were Magda, and Hollywood star Eva Gabor, who achieved greater acting success in the United States than her sister for her role in the 1960s hit television series “Green Acres.”

Zsa Zsa also came to be known for her love of diamonds and frequently was photographed dripping in the sparkling gems.

During nine marriages and a prodigious number of affairs that made her a fixture in America’s gossip magazines, she had just one child — a daughter Francesca, fathered by hotel magnate Conrad Hilton.

She wrote in her 1993 autobiography “One Lifetime is Not Enough” that she lost her virginity at the age of 15 to Kemal Ataturk, the founder of modern Turkey.

“For the rest of my life, I would search for another god to eclipse him,” Gabor wrote.

Her romantic scorecard was a “Who’s Who” of Hollywood heartthrobs of her day, and her kiss-and-tell book detailed romances with screen legends Sean Connery and Frank Sinatra.

Gabor was known to be picky, however, spurning the advances of John F. Kennedy, Elvis Presley, John Huston and Henry Fonda, she wrote in her autobiography.

Her romantic dalliances even included a flirtation with screen legend Greta Garbo.

“She kissed me straight on the mouth. And I couldn’t help kissing her back because she was so overwhelmingly strong and so beautiful,” Gabor wrote.

In June 1989, Gabor made headlines when she slapped the face of a Beverly Hills police officer for giving her a traffic ticket. She was sentenced to three days in jail and ordered to pay $13,000 in court costs.

The loquacious actress was known for an endless stream of bon mots, mostly uttered on the talkshow circuit, about her favorite topics: love, sex, romance and divorce.

– A man in love is incomplete until he has married. Then he’s finished.

– Husbands are like fires — they go out when unattended.

– I never hated a man enough to give him diamonds back.

– I’m a great housekeeper. I get divorced. I keep the house.

– You never really know a man until you have divorced him.

Gabor, who had been in and out of hospital since a hip replacement in 2010, had several close brushes with death in recent years.

A 2002 car accident left the actress partially paralyzed and wheelchair-bound. She also had a stroke in 2005. One of her legs was partially amputated.

In 2011, von Anhalt said he had kept the extent of Gabor’s medical problems from her, so that she could enjoy the festivities in typical style.

“We had some champagne and caviar .. we really celebrated good,” he told AFP at the time. “I knew she had to go to the hospital, but I didn’t want to tell her anything.” CBB